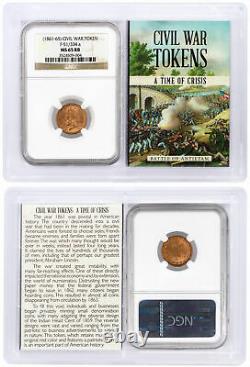 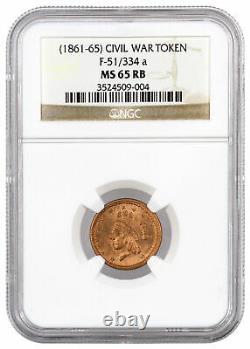 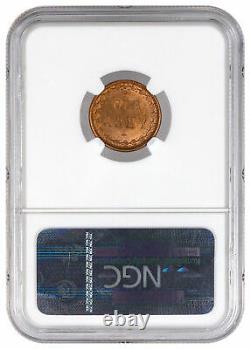 That makes this coin appealing to collectors who are students of monetary history, as well as Civil War buffs and those who have served in or otherwise have ties to the United States Army. "OUR ARMY" is inscribed on the reverse in large lettering. A star and a diamond are the only other two design elements in the center, though they are circled by a rim along the wreath.

Thirteen stars encircle an image of a Native American on the obverse. Representing the original colonies and, by extension, union, those stars were powerful symbols at the time.

The Native American is depicted wearing a feathered headdress, making the image almost identical to James Longacre's Indian Head cent. The Numismatic Guaranty Corporation (NGC) graded this token MS65 RB, which indicates a reddish-brown color, as well as a high quality strike and luster, though there are some scattered contact marks. If you like pieces with intriguing stories behind them, this token is for you! It even comes in a special holder with a card carrying its story! Specifications for this 1861-65 Civil War Token F-51/334 a Our Army NGC MS65 RB SKU38948.

We cannot make any price adjustments after the sale is complete. Product Photo Policy: MCM attempts to display product images shown on the site as accurately as possible. We take all of our photos in house and due to reflections on the mirrored or proof surfaces of a coin there may appear to be'black' when there is not. If a coin has a color on it at all it will be described as'colorized' in the description or title. Due to the large inventory we sell, we use stock photos. Serial numbers will vary from the image shown unless specifically stated in the product listing that the item pictured is the item you will receive. INTERNATIONAL ORDERS POLICY: We are accepting international orders from select countries. These charges are the customer's responsibility. However, we cannot guarantee this due to the volume of orders we process each day. Beyond the 30-day return period, Company is under no obligation to accept return of any product, but may in its discretion do so pursuant to this policy, for up to one year from the invoice date. ModernCoinMart (MCM) was launched in 2004 and quickly set the standards for online sales of bullion, US coins and world coins. Join over 100,000 loyal customers and feel confident purchasing from a company that's spent a decade building a solid and stellar reputation trusted and recognized around the world. That's the MCM way. 1921 Silver Morgan Dollar NGC or PCGS MS63. Civil War Token F15/319 a Army & Navy 1863 NGC MS64 RB Story Vault. This listing is currently undergoing maintenance, we apologise for any inconvenience caused. This item is in the category "Coins & Paper Money\Exonumia\Tokens: Civil War". The seller is "mcm" and is located in this country: US. This item can be shipped worldwide.