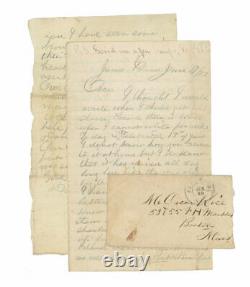 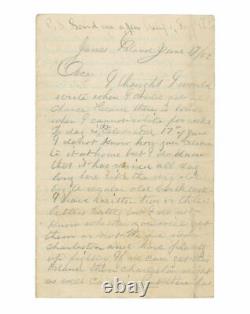 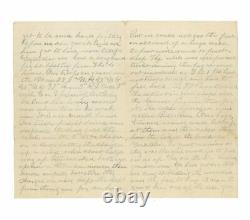 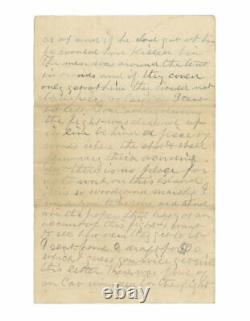 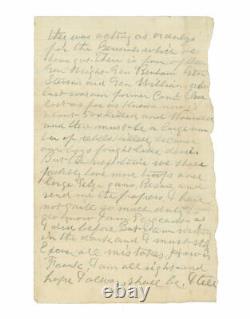 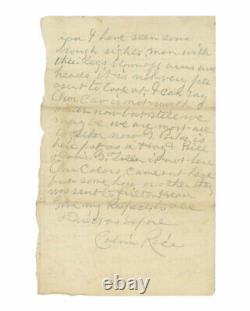 A wonderful June 1862 letter written by Sergeant Calvin Rice of the 1st Massachusetts Cavalry. Written the day following the Battle of Secessionville (First Battle of James Island) near Charleson, South Carolina, Rices letter includes details of the battle. If we can get this island then Charleston might as well cave in, he began, but there has got to be some hard fighting before we can get it.

After naming each of the regiments that participated in the battle, Rice mentioned the repeated assaults on a battery (presumably the Tower Battery) by the 3rd New Hampshire in which the Granite Staters were surprised by a masked battery that mowed them down awfully. After the federal withdrawal, Rice wrote that the Confederates hurrahed and yelled Bulls Run, to which the Union troops turned and asked them how they liked the looks of Yorktown. Of the Rebels failure to follow up their victory by pursuing the retreating Union column, Rice wrote they are the d_____ cowards you ever saw. He recounted a situation where a rebel had been captured killing federal wounded. They have to have 12 men to guard him.

One of the men got an ax and if he had got at him he would have killed him. The men was around the tent in crowds and if they could only get at him there would not be a piece as large as [a] 3 cent bit left.

Really a nice letter from one of the early battles around Charleston. It was written in pencil on six pages covering two sheets of 5 x 8 stationery. It is in very good condition with light foxing and toning.

Minor edge wear, particularly on pages 5 and 6, which have a rough margin from having been removed from the remainder of its original sheet. Includes the original cover addressed to Oscar Rice in Boston. The full transcript of the letter follows.

James Island June 17 / 62. I thought I would write when I could get a chance because there is times when I cannot write for weeks. Today is the celebrated 17th of June.

I do not know how you celebrate it at home, but I do know that it has rained all day long here like the very old bay. I have written two or three letters lately, but I do not know whether you will get them or not. We are near Charleston and have plenty of fighting. If we can get this island then Charleston might as well cave in, but there has got to be some hard fighting before we can get it.

And we have got to have more troops. Yesterday we had a very hard fight, lasting from 3 to 4 hours. Our troops engaged was the Mass 28, 3d N.

8th, with 6 or 8 pieces of artillery. The land here is very woody and when there is no woods then it is all marsh land. Our troops fought bravely and desperate. They drove back the Rebels and the 3d N. Charged on a large battery. They charged up a road when about half way up two masked batteries opened on them and mowed them down awfully, but still they charged on and kept the rebs from their guns for an hour. But we could not get the fort on account of a large ditch 20 foot wide, mud 10 foot deep. The rebels was reinforced twice during the fightonce outnumbered us 3 to 1. We had not troops enough and hat to fall back. Covered the retreat in good shape and the Generals praised them for it. The rebels hurrahed and yelled Bulls Run. Our boys turned round and let up at them and then asked them how they liked the looks of Yorktown. As great numbers as they was they did not dare to follow us up. They are the d____ cowards you ever saw. We have got one that we caught killing the wounded and they have to have 12 men to guard him. Our Cavalry during the fight was drawn up in line behind a piece of woods where the shot & shell flew very thick accordingly.

But there is no place for us to work on this island. It is so woody and marshy.

I want you to be sure and send me the papers that has got an account of this fight. I want to see how near they get to it. There was four of our Cav wounded in the fight.

They was acting as orderlies for the Generals which we have got. There is four of them, Gen. [Robert] Williams, which last was our former Colonel. Our loss as far as known now is about 500 killed and wounded and there must be a large number of rebels killed because our boys fought like devils.

But the next time we shall probably have more troops and large siege guns. Be sure and send me the papers. I have not quite so much duty to do now. I tell you I have seen some rough sights. Men with their legs blown off, arms and heads.

It is not very pleasant to look at. I can say our Cav is not worth much now, but still we may be.

We are most all together now. Porter is here fat as a hog & William N. Our Colors came out here, but somehow or other they was sent to Hilton Head. Give my respects to all. Send me a few stamps. Please see my other items for more interesting Civil War letters, documents, and images.

The item "1862 Civil War Letter 1st Massachusetts Cavalry Battle of Secessionville" is in sale since Tuesday, June 18, 2019. This item is in the category "Collectibles\Militaria\Civil War (1861-65)\Original Period Items\Correspondence, Mail".