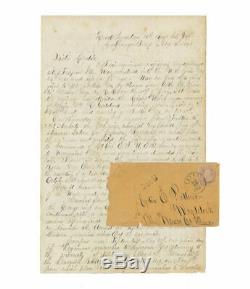 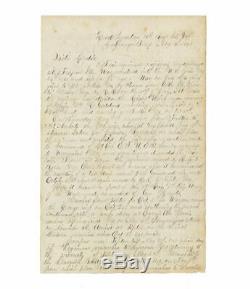 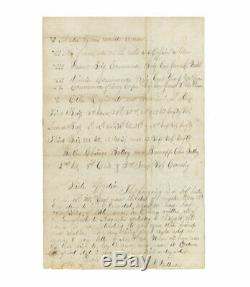 Writing from LaGrange, Tennessee, to his sister in Woodstock, Illinois, Patterson gave a concise history of the 15th regiment from the day of muster May 24th 1862, down to the present date, which we have been compiling. It is a very detailed point-by-point history of where the regiment marched, camped, and fought through November 1862, including the battles of Shiloh and Hatchies Bridge , noting the officers who became casualties. The letter was written upon four folio pages measuring about 8 x 12 1/2.

It is in very good condition with light foxing and toning. Minor paper loss at a couple of points around the edge, as well as a couple of very small tears. Includes the original stamped postal cover addressed to Lydia Patterson in Woodstock, Illinois.

This regiment originally rendezvoused at Freeport Ill. Was mustered into the U.

Service May 24th 1861 and left for the seat of War on July 19th / 61, going first to St Charles Mo. By steamer from Alton Ill. On the 21st of July. At Mexico the regiment was divided, the Right Wing under command of Major Wm R. Goddard marching from Mexico on the 29th inst.

And arriving at Fulton Mo. On Thursday Aug 8th marched from Fulton to St Aubert on Mo. River, where it embarked Aug 10th on steamer Galan for Jefferson Barracks, at which place the regiment was reunited.

The left wing meantime under the command of Lt. Ellis having marched to Hannibal Mo. And from thence descended the Miss.

From St Louis the regiment moved by R. On August 14th arrived, where it remained with the exception of a two days march to the Gasconade river until October 4th, when it again moved by R. Here it became a part of the 1st Brig. Army of the West, under command of Gen. Marched from Tipton on Oct 21st for Warsaw, crossed the Osage river on Oct 24th and continuing the march southward, with a weeks delay at Camp Au Revior, reached Springfield Mo. Commenced return on November 9th. Arrived at Tipton on the 19th inst. Distance marched since Oct 21, 208 miles.

Marched from Otterville on Feb 7th 1862. Reached Jefferson City on Feb 10th. Moved from this place by R.

To St Louis on Feb 12th, where the regiment embarked Feb 13th on steamer D. Arrived at Fort Donelson Tenn on Feb 16th a few hours after the surrender of the fortifications.

Here it became a part of the 4th Division, Army of the Tenn. Under the command of Brig. Marched from Ft Donelson to Belle Landing near Ft Henry on the 5, 6, & 7 days of March 1862. Started for Pittsburg Landing on steamer Hastings and Aleck Scott on March 11th. Disembarked at Pittsburg Landing on March 17th.

Here took a prominent part in the Battle of Shiloh, having five hundred (500) men engaged and losing one hundred and ninety four (194) in killed and wounded. Among the killed were Lt Col E. Ellis, Commanding the Regiment at the time of his death. Major Wm R Goddard, Capts Holder Brownell and Harley Wayne and Lieut John W. During the advance on Corinth it encamped near Chewalla Miss. Till June 10th, when the march to Grand Junction commenced. Arrived at the latter place on June 15th. Marched to Holly Springs Miss.

On June 16th and 17th. Marched to LaGrange on June 22nd. Arched to Goldwater Creek near Holly Springs on June 30th and July 1st. Commenced march from LaGrange to Memphis July 13th. Arrived at the latter place on July 21st.

Camped below Ft Pickering until Sept. On the last three days of August took part in an Expedition having for its object the dispersion of a Guerrilla force on Noncannah Creek, 16 miles south east of Memphis. This expedition under the command of Gen James C. Veatch resulted in the total rout of the enemy and the capture of thirty prisoners. On Sept 6th the regiment again took the field, and after a march of ninety (90) miles reached Bolivar Tennessee on Sept 13th.

On Sept 15th marched to Dunlap Springs returning on the following day. On Oct 4th marched twenty three (23) miles and camped on Big Muddy Creek, three miles west of Matamora. On the succeeding day the 15th Regt under the command of Lieut Col Geo C Rogers took part in the Battle of the Hatchie, which resulted in the complete rout of the enemy and the capture of a Battery and four hundred (400) prisoners.

Left Bolivar en route for LaGrange Nov 3rd and arrived at LaGrange on Nov 5th, at which place the regiment is now encamped. Turner having resigned his commission on Oct 29th on account of ill health received a notification of its acceptance on Nov 3rd and with our deep regret that a separation was necessary, parted with his old companions in arms, while on the march to LaGrange Tennessee Nov 3rd 1862. Originally mustered 1013 Officers and Men.

5th Ohio & 2nd Tenn. The foregoing is a brief history of the 15th Ill. From the day of muster May 24th 1862, down to the present date, which we have been compiling, of late, and, as I have written all of the army news to Augustus yesterday, I thought this would be more interesting to you and other friends and relatives than anything else I could write in answer to your letter of Nov 9th / 62. When all have read this that wish to, lay it away and preserve it.

Edwins letter of late date is read. Will answer it in a day or two.

History" is in sale since Wednesday, June 5, 2019. This item is in the category "Collectibles\Militaria\Civil War (1861-65)\Original Period Items\Correspondence, Mail". The seller is "iron-horse-sales" and is located in Champaign, Illinois.