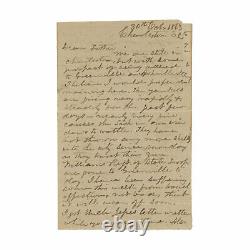 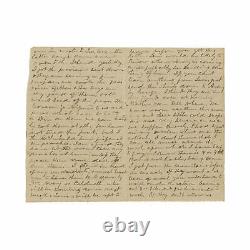 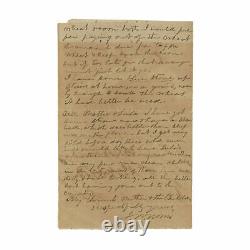 In this letter written to his father in October 1863, Sergeant Major J. Norris of the 1st South Carolina State Troops discusses Yankee artillery firing into Charleston, poor Confederate provisions, and his need for warm clothing as colder weather approached.

Norriss regiment was a six-month unit organized in the fall of 1863 for local defense in the state. Norris opens the letter stating we are still in Charleston, but with some prospect of being ordered to Greenville or Asheville, N. He continues, the Yankees are firing very rapidly & steadily for the past few days. Since August Federal artillery had been harassing the city from their Marsh Battery position near Morris Islandincluding the brief use of a massive 16,500-pound Parrott rifle nicknamed the Swamp Angel.

Norris notes, however, that they have not thrown any more shells into the city since Monday as they burst their gun. The gun he refers to was not the Swamp Angel, which burst in August, but of another gun firing from the same position. Norris then mentions Williamss Regt.

Of State Troops are gone to Greenville today, referring to Colonel James H. Williamss 5th State Line Infantry. He also mentions that James L. Orr, Confederate Senator and organizer of Orrs Rifles, came down & went over to the Island yesterday. In the remainder of the letter Norris discusses his living conditions.

The peas and rice sent from home the boys are very fond of, while the red peas issued by the government have so hard a skin on them we can hardly eat them at all. He asks for some underclothing to be sent via Mr. Avery or CaldwellLieutenant Asa Avery and Private Robert Caldwell, both of Norriss Company C. He closes the letter with an observation that illustrates how, despite doing little damage to the city, the Yankee shelling had caused much of the civilian population to fleeThere are very few nice clean children in the city. Most of them here are dirty & bad looking, all the better sort having gone out to the country. The letter was written on four pages of a small 3 3/4 x 6 letter sheet. Very good condition with moderate toning. Creased at the original mailing folds. The transcript of the letter follows. We are still in Charleston, but with some prospect of being ordered to Greenville or Asheville, N. I believe I would prefer remaining here. The Yankees are firing very rapidly & steadily for the past few days. Nearly every fire causes the sash in our windows to rattle. They have not thrown any more shells into the city since Monday as they burst their gun. Of State Troops are gone to Greenville today.

I have been suffering some this week from bowel affliction, not bad, think it will wear off soon. I got Uncle Jesses letter written while you were there. Also one he wrote to James Orr. The latter came down & went over to the Island yesterday. I got provisions sent down & they are serving a fine purpose.

We cook the peas & rice together & the boys are very fond of them & all want seeds of the peas. The Government issued to us red peas which have so hard a skin on them we can hardly eat them at all. We have not tried the fruit, but I think I would have preferred the peaches.

I stand in need of my undershirts & must trouble you to have them sent down by Mr. Avery or Caldwell who will be coming down next week.

Lowery will be apt to leave before you get this letter. Levi would be likely to know when Avery is coming & will probably be sending something by him. If you cant learn anything from Levi, just send the shirts down to Avery by George. I think they are in my trunk at home. We have warm weather this morning, but these little cold snaps are very severe on us & we suffer severely.

I had to put on my woolen shirt over the cotton. If they want a return of wool, you will have to weigh & make the return, leaving out 8 or 9 lbs out for the mountain wool. But if too late for that arrangement, just let it go. Upstairs at home in a gourd, nearly enough to soak the wheat.

It had better be used. Tell Mother & Lula I have got some straw now & have a straw bed, which does better than sleeping on the floor, but I get very cold before day these cold mornings & would like to have Lulas arms twice about my neck. There are very few nice clean children in the city. My love to Mother & the children.