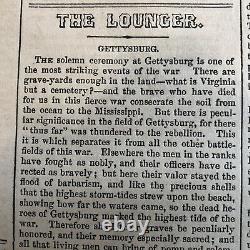 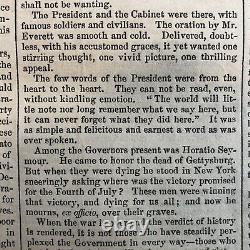 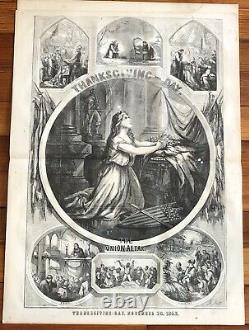 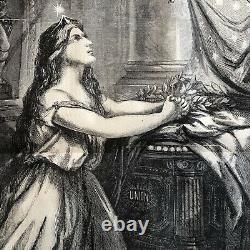 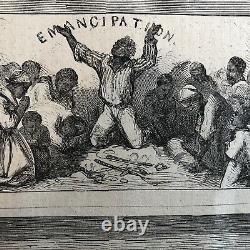 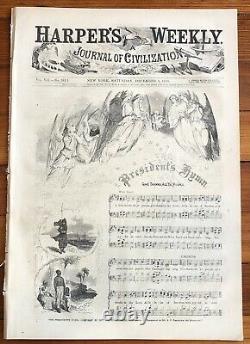 1863 CIVIL WAR newspaper with a detailed account of President Abraham LINCOLN'S GETTYSBURG ADDRESS after the Battle of Gettysburg, including the famous quote The World will little note, nor long remember what we say here, but it can never forget what they did here'. This issue also features a large, double-page centerfold Thomas Nast Thanksgiving Day Poster #1A-011.

SEE PHOTO-----COMPLETE, ORIGINAL NEWSPAPER, the _Harper's Weekly Illustrated Newspaper_ (NY) dated December 5, 1863, with fantastic CIVIL WAR, Abraham Lincoln and Thomas Nast history! The entire Gettysburg Address is NOT printed here but detailed reports of the ceremony are uncommon and this report is particularly nice. Perfect for framing and display, this historic piece is A COMPELLING addition to any fine Abraham Lincoln or Thomas Nast collection. The Gettysburg Address is a speech that U. President Abraham Lincoln delivered during the American Civil War at the dedication of the Soldiers' National Cemetery in Gettysburg, Pennsylvania, on the afternoon of Thursday, November 19, 1863, four and a half months after the Union armies defeated those of the Confederacy at the Battle of Gettysburg. It is one of the best-known speeches in American history.

Not even the day's primary speech, Lincoln's carefully crafted address came to be seen as one of the greatest and most influential statements of American national purpose. In just 271 words, beginning with the now iconic phrase "Four score and seven years ago, " referring to the signing of the Declaration of Independence 87 years earlier, Lincoln described the USA as a nation "conceived in Liberty, and dedicated to the proposition that all men are created equal, " and represented the Civil War as a test that would determine whether such a nation, the Union sundered by the secession crisis, could endure. He extolled the sacrifices of those who died at Gettysburg in defense of those principles, and exhorted his listeners to resolve. That these dead shall not have died in vain that this nation, under God, shall have a new birth of freedom and that government of the people, by the people, for the people, shall not perish from the earth.

Despite the prominent place of the speech in the history and popular culture of the United States, its exact wording is disputed. The five known manuscripts of the Gettysburg Address in Lincoln's hand differ in a number of details, and also differ from contemporary newspaper reprints of the speech. Neither is it clear where stood the platform from which Lincoln delivered the address. Modern scholarship locates the speakers' platform 40 yards (or more) away from the traditional site in Soldiers' National Cemetery at the Soldiers' National Monument, such that it stood entirely within the private, adjacent Evergreen Cemetery. Harper's Weekly was the most widely read newspaper in the United States throughout the period of the Civil War. So as not to upset its wide readership in the South, Harper's took a moderate editorial position on the issue of slavery prior to the outbreak of the war. Publications that supported abolition referred to it as "Harper's Weakly". The Weekly had supported the Stephen A. Douglas presidential campaign against Abraham Lincoln, but as the American Civil War broke out, it fully supported Lincoln and the Union. A July 1863 article on the escaped slave Gordon included a photograph of his back, severely scarred from whippings; this provided many readers in the North their first visual evidence of the brutality of slavery. The photograph inspired many free blacks in the North to enlist.

Some of the most important articles and illustrations of the time were Harper's reporting on the war. Besides renderings by Homer and Nast, the magazine also published illustrations by Theodore R. Davis, Henry Mosler, and the brothers Alfred and William Waud. In 1863, George William Curtis, one of the founders of the Republican Party, became the political editor of the newspaper, and remained in that capacity until his death in 1892. His editorials advocated civil service reform, low tariffs, and adherence to the gold standard.

This listing includes the complete entire original newspaper. Every item we sell is original printed on the date indicated at the beginning of its description, unless clearly stated as a reproduction in the header AND text body.

This is truly a piece OF HISTORY that YOU CAN OWN! The item "1863 CIVIL WAR newspaper LINCOLNS GETTYSBURG ADDRESS Nast Thanksgiving Poster" is in sale since Tuesday, April 21, 2020. This item is in the category "Collectibles\Militaria\Civil War (1861-65)\Original Period Items\Newspapers". The seller is "boyl-timo" and is located in Oxford, Maryland. This item can be shipped worldwide.