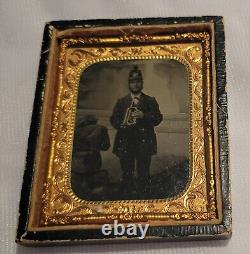 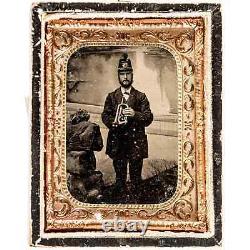 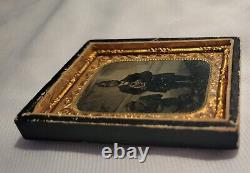 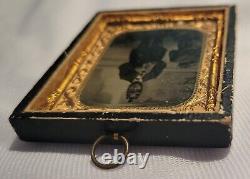 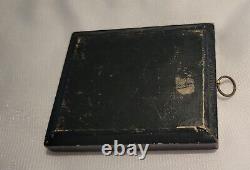 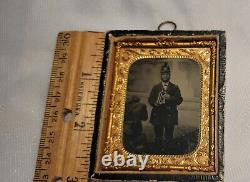 Excellent crystal clear contrast Tintype Photograph of a bearded, uniformed Civil War Musician holding his bugle and wearing his Band Shako with a large Star-shaped badge plate and plume. The image is housed in an ornate gilt Civil War period frame measuring 2" x 2.5" (being the correct size for a Ninth Plate Tintype). The image and frame are housed in a half-case with a small round hanger attached at top for hanging on display as shown. Inside the case identified as Henry O'Doul and the dated 1864 written in pencil, as he was most likely a Union band military bugler. A Shako is a tall, cylindrical military cap, usually with a visor, and sometimes tapered at the top.

It is usually adorned with some kind of ornamental plate or badge on the front, metallic or otherwise, and often has a feather, plume, or pompom attached at the top. During the middle ages, groups of marching musicians joined feudal armies, where their music was used to direct troops on the battlefield and to maintain morale. Like the soldiers in these armies, musicians wore plumes from local birds, specific colors, and distinct motifs to show their loyalty to a lord. This item is in the category "Collectibles\Militaria\Civil War (1861-65)\Original Period Items\Photographs".