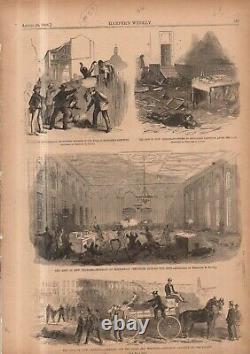 Negro demonstrators set upon by white Confederates. New Orleans Massacre of 1866. Occurred on July 30, when a peaceful demonstration of mostly black Freedmen was set upon by a mob of white rioters, many of whom had been soldiers of the recently defeated Confederacy, leading to a full-scale massacre. The violence erupted outside the.

The Republican Party of Louisiana had called for the Convention, as they were angered by the legislature's enactment of the. And refusal to extend voting rights to black men.

White conservative Democrats considered the reconvened convention to be illegal and were hostile towards Republican attempts to gain increased political power in the state. The massacre "stemmed from deeply rooted political, social, and economic causes, ". And took place in part because of the battle between two opposing factions for power and office.

According to the official report, a total of 38 were killed and 146 wounded, with 34 of the dead and 119 of the wounded black. Gilles Vandal estimated 40 to 50 blacks dead and more than 150 wounded. In addition, three white convention attendees were killed, as was one white protester. Over One Million Magazines in stock.

In the trade since 1976. Chosen Reflections/Million Magazines, Kaufman Texas 75142. This item is in the category "Collectibles\Militaria\Civil War (1861-65)\Original Period Items\Other Civil War Original Items". The seller is "millionmagazines" and is located in this country: US. This item can be shipped worldwide.