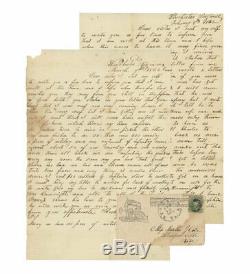 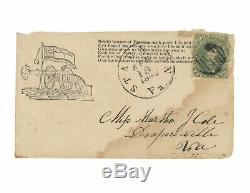 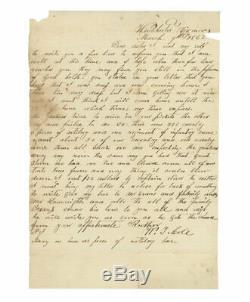 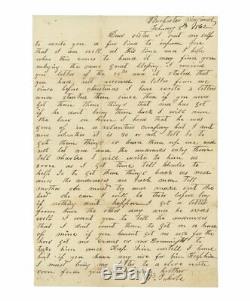 A pair of early 1862 letters written by Private William T. Cole of the 21st Virginia Infantry to his sister back home in Drapersville, Virginia.

Included with the letters is a Confederate patriotic postal cover with verse, 5-cent Jefferson Davis stamp, and Staunton, Virginia postmark (further details below). Cole and his regiment were then stationed at Winchester in the lower Shenandoah Valley as part of Stonewall Jacksons Valley Army. The more interesting of the two letters was written from Winchester on March 9, 1862. In it Cole described an attempt by the yankees to drive in rebel pickets in the opening moves of the Valley Campaign. There was 250 cavalry, 3 pieces of artillery, and one regiment of infantry came against about 50 of our cavalry and our cavalry drove them all back, he wrote.

We are expecting the yankees every day now. They didnt need to wait long, because just three days later Union General Nathaniel Bankss troops occupied the town as Jackson withdrew up the Valley.

The first engagement of the campaign, Kernstown, would be fought just two weeks later. The second letter was written on February 8, 1862, also from Winchester. This letter is mainly about a disagreement between Coles family and another family called Andrews, possibly over some horses.

The full circumstances remain unclear, but it sounds like an escalating matter between the two families. Each letter was written on a lined sheet of paper measuring about 8 x 12 1/2. They are in very good condition with minor toning, light foxing, and creases where it was originally folded. There is also some minor paper loss at a couple of corners and edges. There is some minor edge separation at a couple of the folds.

Quite stable otherwise, with excellent readable handwriting. The patriotic cover was addressed to Miss Martha J. It measures about 5 x 2 3/4 and is in good condition with soiling to lower-right area. It depicts a cannon firing next to a Confederate national flag. The verse reads (with some words covered by the stamp). Bright banner of Freedom with pride I unfold [thee;]. Fair flag of my country with love I behold thee. Gleaming above us in freshness and youth. Emblem of liberty, symbol of truth. For the flag of my country in triumph shall wa[ve]. Oer the Southerners home and the Southerners grave. The Yankees tried to drive in our pickets the other day and failed to do so. There was 250 cavalry, 3 pieces of artillery, and one regiment of infantry came against about 50 of our cavalry and our cavalry drove them all back. The same day you had that great storm we had one too and blowed down all of our tents, trees, fences and everything it could blow down. I must bring my letter to a close for lack of something to write. Give my love to Mr. Evans and family and Mr. Drumright and also to all of the family. Drumright sends his love to you all and says he will write you as soon as he gets the chance. Jinny we have 30 pieces of artillery here. I received your letter of the 26th and it stated that you had not received a letter from me since before Christmas. I have wrote 4 letters and started them since then. If you never got them things that Ned has got, if he dont bring them back I will run the law on him.

I heard that he was gone off in a volunteer company but I dont know whether it is so or not. Tell Jo to get them things or burn them up and not let Ned and the Andrewses enjoy them.

Tell Charles I will write to him as soon as I get time. Tell Charles to help Jo to get them things back as Ned and the Andrewses are such men. Tell mother she must try and make out the best she can.

I will be there before long if nothing dont happen. I got a letter from Jim the other day and he was well.

I want you to tell the Andrewses that I dont want them to get on a horse of mine if you havent got no use for the horse get Mr. Drumright to take him and keep him until I come, but if you have any use for him keep him. I must bring my letter to a close. Please see my other items for more interesting Civil War letters, documents, and images. The item "2 Confederate Civil War Letters 21st Virginia Shenandoah Valley Campaign" is in sale since Tuesday, June 18, 2019. This item is in the category "Collectibles\Militaria\Civil War (1861-65)\Original Period Items\Correspondence, Mail". The seller is "iron-horse-sales" and is located in Champaign, Illinois.