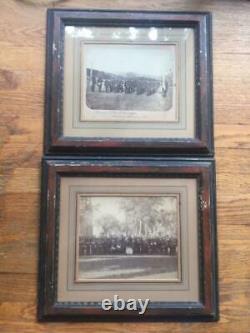 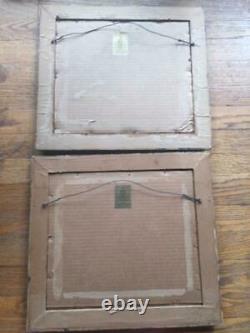 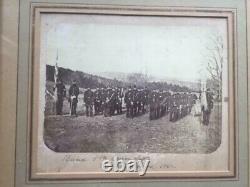 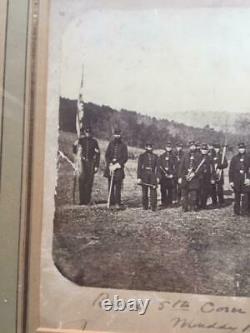 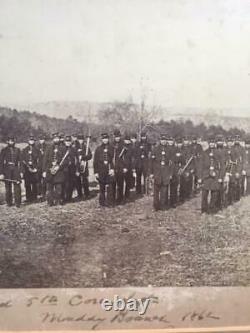 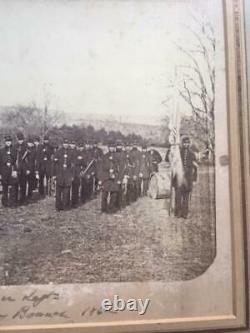 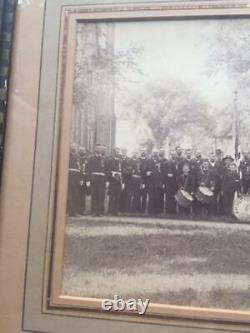 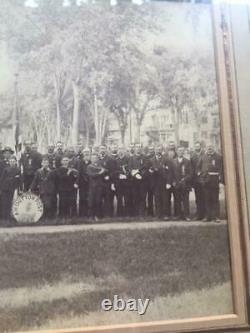 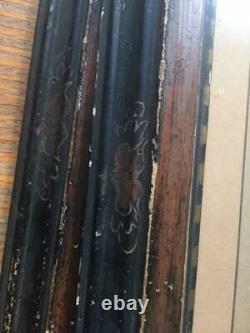 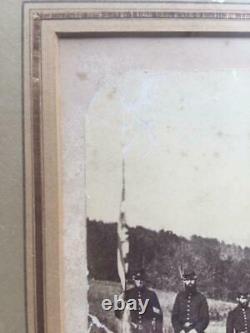 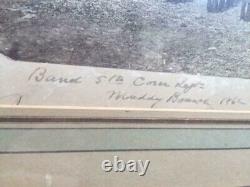 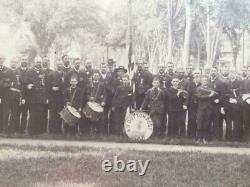 Here is a truly wonderful pair of antique albumen images framed in matching antique folk art style frames. The first image shows the 5th Connecticut Infantry band posed in the field with their instruments. I count 27 men in all in their uniforms and 2 men are holding flags.

The period ink inscription at the bottom states Band 5th Conn. Muddy Branch 1862 (I believe this was in Maryland) The second image shows a Grand army of the Republic reunion of what I would guess to be the surviving members of the men in the first photo as well as their children. I count 42 people in this photograph. Most of the men appear to be wearing GAR medals and the children are posed as drummer and fifers. The large drum in the center says A.

R (and the number 36 in the middle) The A. Dutton Post looks to have been in Wallingford CT.

The albumens are matted with the original antique mat board which still displays well. In my opinion, the frames just add to the character.

They both have a wonderful folk art feel to them. The frames are in no way perfect scratches, scuffs, etc. But that is how I always preferred them, showing their age. The glass front measures 10.5" by 12" and the frames measure 13.5" by 15" I've had these hanging by my desk for years and feel that it is time for someone else to enjoy them.

Army of the Potomac and Army of the Cumberland. 2nd Brigade, 3rd Division, XX Corps.

(then still technically part of Virginia) on July 30, and did duty there until August 16. Next they did guard and outpost duty on the Upper Potomac until February 1862. At the same time they were involved in operations near Edward's Ferry October 2024, 1861.

At Strasburg till May 20. Retreat to Winchester May 2025. Action at Front Royal May 23.

Battle of Winchester May 2425. Retreat to Martinsburg and Williamsport May 25-June 6. At Williamsport until June 10. Moved to Front Royal June 1018. Reconnaissance to Luray June 2930.

Battle of Cedar Mountain August 9. Battle of Bull Run August 2930. Duty at Frederick until December 10. March to Fairfax Station December 1014, and duty there until January 19, 1863.

At this point they shifted from the Virginia/West Virginia/Maryland/Pennsylvania region to Alabama, Tennessee and Georgia. March to Brandy Station, then to Bealeton and movement to Stevenson, Alabama. Guard duty along Nashville and Chattanooga Railroad. At Cowan and Cumberland Tunnel until April 1864. Demonstration on Rocky Faced Ridge May 811.

Bennett's House April 26. Surrender of Johnston and his army.

Grand Review of the Armies. The regiment lost a total of 193 men during service; 6 officers and 104 enlisted men killed or mortally wounded, 1 officer and 82 enlisted men died of disease. The item "2 Framed Civil War Albumen Photos 5th Connecticut Infantry Band Musician Soldier" is in sale since Tuesday, May 28, 2019.

This item is in the category "Collectibles\Militaria\Civil War (1861-65)\Original Period Items\Photographs". The seller is "ghost*of*tom*joad" and is located in Bartlesville, Oklahoma. This item can be shipped worldwide.