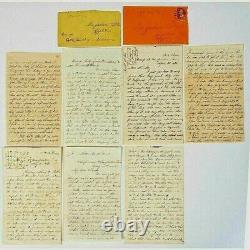 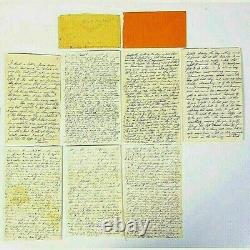 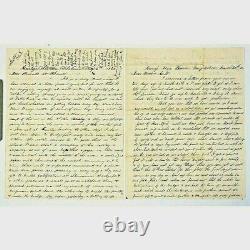 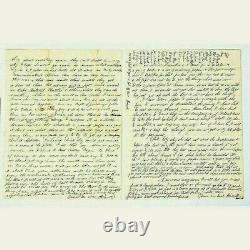 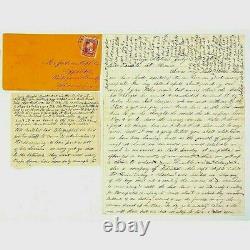 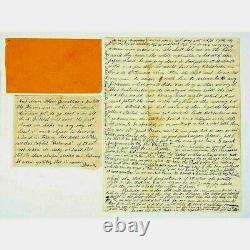 PLEASE BROWSE ALL OUR ITEMS. ABSOLUTELY THE BEST SELECTION ON.

During this time, Phelps and his regiment occupied different areas around both Murfreesboro and Huntsville, where he participated in the capture of that city, as well as the Battles of Perryville and Stone's River. His letters are addressed generally to his friends and family at home in Appleton, Wisconsin, and he shares with them several remarkable details about his experiences in the South, including an ambush by bushwhackers in Alabama. Six months after his enlistment as a private, Phelps writes from Camp Van Buren in Murfreesboro. He describes the march into the city, paying particular attention to horticultural details. The folks down there had their gardens all made & the flowers were all up in blossom.

If I can I will get some seeds or specimens of the flowers down here when I can get a chance & send home. The peach trees are in blossom; so are the apple trees.

" He also discusses a recent stint on guard duty, where he was responsible for eight Confederate prisoners, who ". Expected to be shot as soon as they got here. That is what they were told, if they were captured that they would either be shot or hung as quickly as we could do it. Later that summer, Phelps recounts a festive Fourth of July celebration in Gurley, Alabama, attended by several locals including. A multitude [of] the cullurd.

People off from one plantation. He records a program of the entertainment, including speeches, toasts, music, and dancing, as well as a detailed menu, noting that it. Was a day that will long be remembered by both this company & the few Union citizens that helped us celebrate as it is the first time in three years that they did anything on the fourth.

In the same letter, Phelps tells his friends of a harrowing attack on another company of his regiment by Confederate guerrillas during patrol along the Memphis and Charleston Railroad. When the soldiers assigned to guard duty that night did not return, Captain William Moore took the rest of his men out to retrieve them. R[a]n right into a whole company of bushwhackers that had come down the mountain to this cut to fire into the train when it passed. Well they rushed out & took the captain and 3 men prisoners.

The 3 boys that were with the captain got away & they say that the Capt. Sat down and talked with the secesh for some time. The Rebels did not expect that the [rest of Moores] company was close on them so they sat there waiting for the train when the company pitched into them.

One Rebel that was next to the Capt. Got up and told him to come along wit him, [but] Capt.

Moore sat on the track & said he would not stir a bit when this fellow (or brute) that was next to him shot a charge of buckshot through him killing him on the spot. The following year, while encamped near Murfreesboro, Phelps writes on April 23 of a series of skirmishes that, while uneventful, seem to be part of General William Rosecrans's overarching strategy.

It is generally supposed that our brigade went out on purpose to draw the Rebels on. If that is the case, you may expect to hear of a bloody battle. I think Old Roses' plan is about the same as it was down there at Corinth.

He has this place fortified on the same plan as he had that place & his object is to draw them on & let them get up to town but that is as far as they can go & if they get that far it will be sure death. In his next letter, dated May 5, 1863, Phelps tells of a visit to the surrounding forts and describes the different guns he sees at each location, writing in part. We found 16 guns mounted in this [fort].

It is not finished yet. I will describe only one gun & let you imagine the rest. This one is a siege howitzer. The gun is about six feet long, 28 in. In diameter at the muzzle.

The bore is 8 in. So the thickness of the iron is 10 inches. At the breach it is about 3 feet in diameter. It will throw a solid shot weighing 64 lbs over four miles.

They are not very nice things to get shot with. " In this same letter, Phelps shares an interesting anecdote about an encounter with a local woman in her garden, apparently a common attraction for Union soldiers passing through the area: ". We came to a very nice garden. I have not seen a prettier one for a long while.

We both stopped to look at some of the flowers when a young lady steps out & invites us to come in & examine them. She took us around & showed us the flowers & then she gave us each a very nice bouquet with an invitation come some morning when the flowers had just blossomed out. I have six different kinds of roses. This lady said that a great many soldiers come by thee & that they always stop to see the garden. Phelps writes that he will dry the flowers and send them home, and this interest in horticulture recurs throughout his letters.

Frequently, he writes of collecting seeds or samples of native plants and comments on the availability of local fruits and vegetables, must notably peaches. On August 6, 1862, while stationed again in Alabama, he explains how the soldiers supplement their rations with the abundance of peaches in the nearby orchards. One day last week six of us went out about a mile & one half & got from three trees all of the ripe peaches we could eat & besides that we brought into camp over a bushel & one half that were just as ripe & mellow as anybody could wish. They were the Clingstone & measured nine inches in circumference.

They have a small pit & the meat is over an inch in thickness & so juicy. Almost every day, a small squad goes out & brings in all of the peaches & apples the company can eat.

We almost live on peaches. Phelps was discharged in March of 1864 but either reenlisted or was transferred to the 38th Wisconsin as a second lieutenant. He was promoted to the rank of first lieutenant on September 6, 1864 and mustered out the following July in Washington, D. Letters with toning and creasing as expected. Some texted cramped/overlapped in margins. The item "7 TRANSCRIBED CIVIL WAR LETTERS OF FIRST LIEUTENANT F.