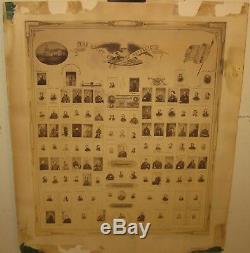 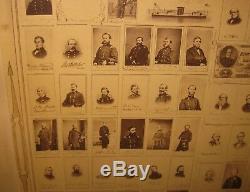 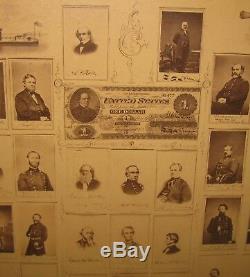 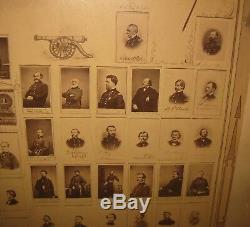 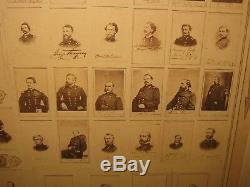 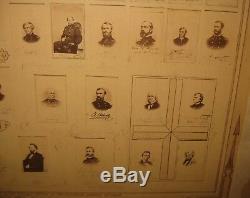 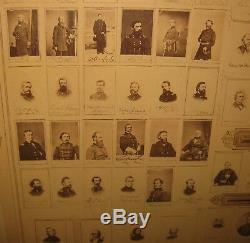 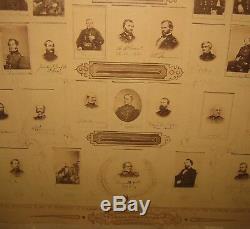 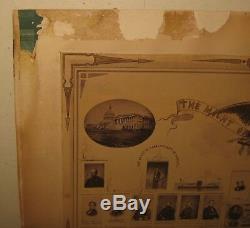 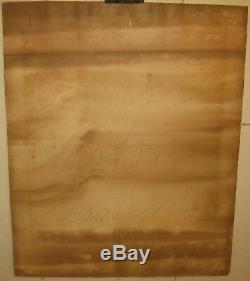 This one is particularly special. I have done a lot of research on this piece and found only 3 other examples of this piece. The Huntington library in California has one according to Worldcat. I have also found one that is in the Cassius Clay Collection at the University of Kentucky. I have included their description of the item below. Titled "The Might of the Republic" it is an 1866 large albumen photograph montage "A collection of original autographs by OH Oldroyd Columbus, OH". It is a large photograph measuring 19 1/2 x 15 1/2 inches on original mount measuring 22 3/4 x 18 1/2 inches. Photograph is in outstanding original condition. Clean and only slightly faded. The mount shows some issues in the corners but nothing that extends into the photograph. There is some discoloration, staining and some skinning to the paper from a the matte being taped down to those edges. Matting and framing to the edge of the albumen photo would hide any of those problems. The back of the mount shows staining from what I believe was an original wood backing.

Do your own research on this incredible photograph. A must have for any Abraham Lincoln, Civil War or important photograph collector. Also displayed are a photo of the United States Capitol and a number of military illustrations. The title of the piece, "The Might of the Republic, " is lettered within an illustrated patriotic motif along the top border.

Oldroyd, In The Year 1866, In The Clerks Office Of The Southern District of Ohio. What is all the more remarkable about the piece is that most of the CDV images used in creating the composite photographic display appear to be produced by celebrated Civil War photographer Mathew Brady. Furthermore, every single CDV was a signed example, presumably from Oldroyd's personal collection. CDVs and cabinet cards of Civil War generals are a very popular field of collecting, with this piece representing the ultimate Civil War generals display piece. Oldroyd, who fought in the Civil War, was the preeminent Lincoln collector of his day and he even opened a Lincoln Museum in 1884.

Today, the bulk of his collection resides in the permanent holdings of the University of Chicago Library. As noted by the Library, the material also includes Oldroyds collection of signatures of military and political personnel. The following is an abridged version of his biography at the University of Chicago Library website. During his time in the Grand Army of the Republic, Oldroyd kept a journal of military events and personal recollections. In 1885 he published portions of this under the title A Soldiers Story of the Siege of Vicksburg.

In 1865 due to asthma-related illness, Oldroyd served as Steward of the National Soldiers Home in Dayton, Ohio. Stoneberger in 1873 and the two had one daughter, Daisy Oldroyd. The family moved to Springfield, Illinois and rented the former home of Abraham Lincoln, which Oldroyd converted into The Lincoln Museum in 1884.

On view was Oldroyds expanding collection of Lincoln memorabilia. After the Lincoln home was donated to the State of Illinois in 1893, Oldroyd moved his family and Lincoln collection to the Peterson House in Washington, D. The government moved the collection to the Ford Theatre, where Lincoln had been assassinated.

Oldroyd published The Assassination of Abraham Lincoln in 1917. The narrative account of Lincolns death became a quick popular success. Oldroyd died in 1930 at the age of 88. Obviously, this composite photo was a labor of love for Oldroyd and he spared no expense in having it made.

While we cannot state how many photographic display prints he produced, or whether or not he offered them for sale to the public, we do know that few have survived. This is the only example of this photographic composite that we have ever seen. We have been unable to locate another and we cannot imagine a more striking large Civil War photographic display print. The photo (14.5 x 18 inches), which is mounted onto a cardboard backing, is lightly toned along the top portion of the print. Light foxing is also evident.

The flaws are extremely minor, the photo displays outstanding clarity, and has an overall strong Excellent appearance. Housed in a period (presumably original) wood frame, which measures 22 x 25 inches.

Together with a portion of backing paper from an earlier framing that bears a label from a Boston, Massachusetts, frame shop. CHECK THE PICTURES ON THIS GREAT PIECE. If you have any questions regarding the work, please dont hesitate to ask.

Just simply contact me and I will handle any and all problems. The item "Antique 1866'MIGHT OF THE REPUBLIC' Abraham Lincoln Civil War PHOTO Montage" is in sale since Monday, July 8, 2019. This item is in the category "Collectibles\Historical Memorabilia\Political\US\Presidents & First Ladies".

The seller is "pmfeld" and is located in Holliston, Massachusetts. This item can be shipped worldwide.