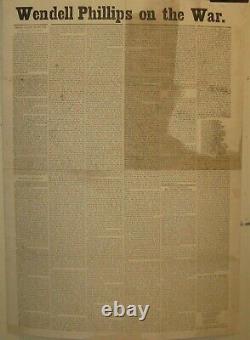 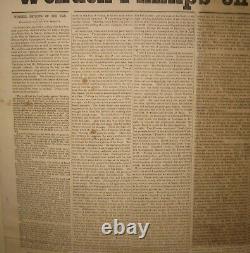 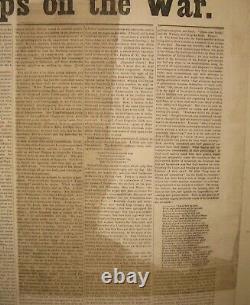 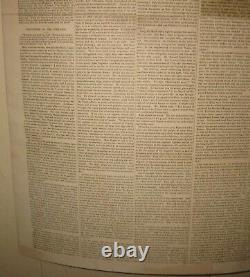 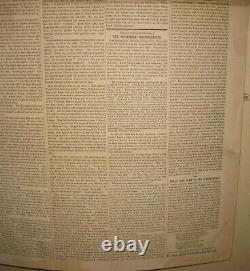 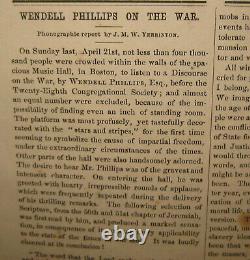 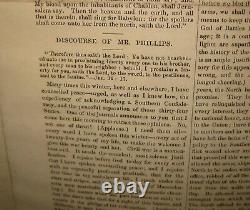 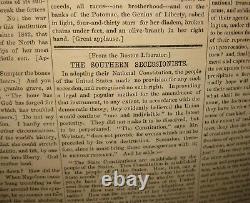 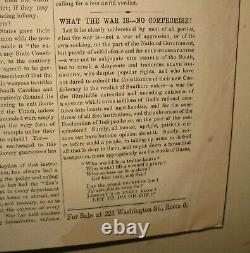 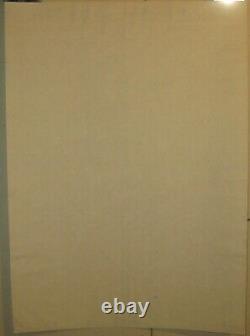 ORIGINAL'WENDELL PHILLIPS ON THE WAR' ABOLITION ANTI SLAVERY CIVIL WAR BROADSIDE. This is a great piece. I have actually owned this for years because I have pulled it out of my collection time and time again and never been able to find another example of it. I dont show an example of it in Worldcat or any of the other institutional holdings.

I cant imagine this is the only example remaining of this Civil War Broadside but perhaps that is the case. Wendell Phillips was a prominent Anti Slavery activist as well as Civil Rights leader in the 19th Century. I have included a more thorough biography below. The Broadside is a large print measuring about 25 x 18 inches. It looks as though it was originally issued folded in quarters.

The rest of it is in clean and crisp condition. It has been laid down on archival backing which has helped preserve it.

The right and bottom margins show some minor loss and repair with just a few letters missing from the bottom line. Otherwise it is complete and preserved.

Do your own research on this broadside. Probably belongs in a museum but this is your chance to acquire what might be the one remaining example of this anti slavery broadside. For those not familiar with Phillips, his biography from a website where he is featured prominently reads: Wendell Phillips was a fervent abolitionist who gave up a promising law career to become of full-time advocate for the cause. He was an eloquent speaker who, like many of his fellow abolitionists, honored the free produce movement and took pains to avoid cane sugar and wear cotton-free clothing since both were produced by slave labor. Phillips' renown for powerful oratory garnered him the nickname of being abolition's Golden Trumpet.

" One of his earliest orations which brought him into the spotlight was his so-called "Freedom Speech, given extemporaneously in Boston's Faneuil Hall on December 8, 1837. While attending a large meeting called in response to news of the death of abolitionist Elijah Lovejoy at the hands of a mob in Alton, Illinois, Phillips heard the Attorney General of Massachusetts James T. Austin compare the mob favorably to the patriots of the Boston Tea Party. Phillips was appalled at Austin's approval of the murderous mob. Though he had not planned to speak, Phillips was driven to speak out in response. After finally getting the attention of the large mass of people inside the hall, he gave a critical rebuke of Austin's arguments.

After speaking for several minutes about the legacy of the American Revolution and the challenges the nation still faced, he forcefully concluded with these words. It is good for us to be here. When Liberty is in danger, Faneuil Hall has the right, it is her duty, to strike the key-note for these United States. The passage of these resolutions, in spite of this opposition, led by the Attorney-General of the Commonwealth, will show more clearly, more decisively, the deep indignation with which Boston regards this outrage. Phillips actively advocated disunion from the slave-holding South, and in 1854 was indicted for attempting to help a runaway slave escape a Boston jail.

After African Americans gained the right to vote under the 15th Amendment, Phillips became involved in other social reform movements, such as those advocating equal rights for women, universal suffrage, temperance, unionism and Native American citizenship. In 1870, Phillips ran for Governor of Massachusetts unsuccessfully as the candidate of the Labor Reform and Prohibition Parties. CHECK THE PICTURES ON THIS GREAT PIECE. If you have any questions regarding the work, please dont hesitate to ask.

Just simply contact me and I will handle any and all problems. This item is in the category "Collectibles\Militaria\Civil War (1861-65)\Original Period Items\Other Civil War Original Items". The seller is "pmfeld" and is located in this country: US. This item can be shipped worldwide.