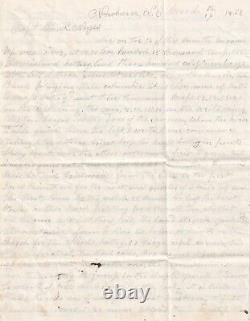 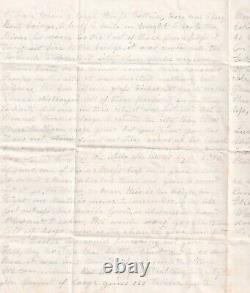 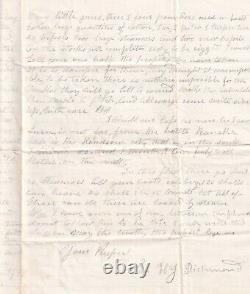 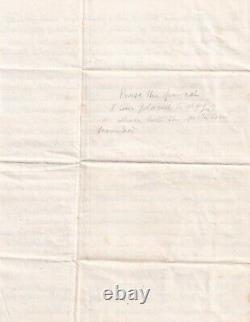 One of the best battle letters that I have ever had. I do not have the postal envelope. Of this month we came up Neuse River.

Landed 15 thousand troops, the Rhode Island battery. And three hundred Neptune boys with all their guns. All on the march, the band playing Hail Columbia.

Come up with a Mass battery. Sent three thousand Mass 23, 24, 26, 40 on the left wing, the Conn 8, 10, 15, 14 on the right wing. Neptune boys in the face of the cannon, when the horn sounded double quick time. I was commenced yelling to the top of these voices, keep the Mass battery in fronts. They went over the other side, never fired a gun, took drag the guns out I made for the 20 battery.

Three thousand men behind breastworks form the line as the front. In 10 minutes on for the next one quarter of a mile up from the first, time by the watch 25 minutes we leap the breast works, rather hard fighting for 10 minutes, then started on the run left. All they had, the band struck Yankee Do. The next order to form a line as before 15 minutes on the march for the third battery, 50 large rifle cannon, this was to protect the rail yard, her we lost a few men. 40 minutes took the fourth one, the horn sounded for the army to jump in the double quick and never to slack off till we arrived in the city. It is thick woods the cold was enough to pack most any to flight. When they started we never allowed them to stop.

We have taken 9 large Mass batteries. There was a large rail bridge a half mile in length across the river.

As soon as the last of these men passed, they set fire to the bridge. It was covered with tar.

It made a splendid site, then made signal for steam boats, in 30 minutes landed three thousand troops in the city. It was deserted, nothing but Negroes, the furniture, glass dishes all broke on the place destroyed all of there property for nothing. A pack of shoals in this city, it was fortified all around there so large a round the city they trust more to these large guns but you know yankees does not stand of. And set themselves up for a much close quarters to our play they cannot stand the bayonet, the most of the rebels was killed by the barrage of guns, one of the 23 Mass lept on a gun to take.

Wheeled their one gun a round, Let it go, killing 30 men. This is the way we fight.

Our noble Gen'l is always on hand, pleasant & calm. They would say goggle them all up boys, now is the chance to give them fight. Gen'l Lester we could hear sing out give them Hell, my hastys, this battle must and in 20 minutes more it was in 15 minutes 5 hours from the time it commenced had all of the fortifications and city. The amount of large guns 150 taken great many little guns. Three & four ponders used in boats, taken large quantities of cotton, tar & pitch & turpentine.

40 rebels, two large steamers and two new vessels. All the stocks all complete ready to be rigged. I cannot tell you one half the property we have taken.

It is a damper for them, they thought it was impossible to be taken. There is noting impossible for the Yankees, they will go all around make the calculated then make a pitch and always come right side up, with care. I think our cofs as mere as I can learn is not far from the battle Roanoke. This is the Handsome city that is in the south. In this fleet there 70 sail, 30 steamers.

All gun boats can bring 120 shells. Can have 40 shells in 15 minutes that all of them can do. These are loaded by steam. Wm, I have seen one of my letters in the Johnson [newspaper], do not allow this to be their 1 only write this so you may the truth, the papers lie so.

Sometimes I will require this to protect us both. This item is in the category "Collectibles\Militaria\Civil War (1861-65)\Original Period Items\Other Civil War Original Items".

The seller is "ivymontcpa" and is located in this country: US. This item can be shipped worldwide.