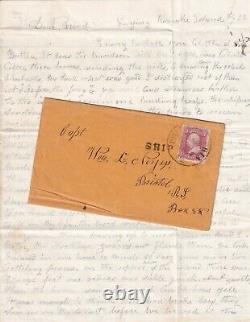 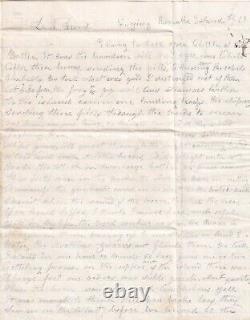 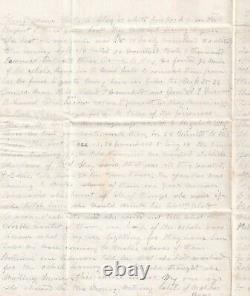 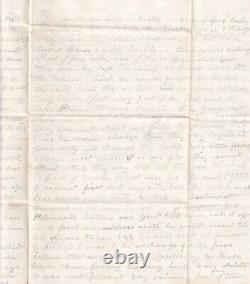 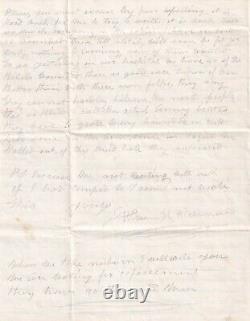 One of the best battle letters that I have ever had. Original envelope accompanies addressed to Capt. Box 88" postmarked "PHILADELPHIA Pa.

Laying Roanoke Island Feby 23 [1862]. I long to tell you a little of the Battle. It was the handsome site my eyes beheld. After three irons, sending the pills, a moving, the rebels gunboats, we took what was good & destroyed rest of them. The Janny 8, 77 sail and steamers in a fleet to the island commenced landing troops. At daylight on the 8. Made the attack, on two large batteries, 48 pieces cannon. These forts were in the woods, the side we were on nothing. A swamp the gunboats came in as last as the water would permit. When the sound of the horn thrilled the air, you would laffed, I think I never heard such awful yell in my life. The word conquer as die we made in charge on them wading up to our middles in mud & water, the Hoskins Zouaves out flanked them. We took Island in one hour 10 minutes.

60 large guns, one or two artillery pieces on the upper part of the island there was a large fort our orders was double quick, closest quarters. When the horn sounded with such amphibious yell, it was enough to think Hell broke loose, they saw us on the alert before we arrived.

The three they come with a flag or white handkerchief on the bayonet of three guns, took this without firing a gun. The lost on our side was 48K, 10 badly wounded, 30 slightly wounded. The enemy lost 110 killed, 70 wounded took 5 thousand prisoners with all these arms, today we found 70 men of the rebels, hove in a mud hole to conceal them from us.

Burnside behaved like was heroes calm & pleasant. As many morning, it took three days for us to take of the prisoners. The 14 we made the way up sound to Elizabeth City where we took gunboats, sunk three, in 28 minutes to the town. The fist these 12, 24 pounders, 5 long 18. The niggers were making off, we told the all we wanted stablish the laws of the U.

They said, that was all they wanted & Davis told them at the town house, the yankees was coming to make slaves of them. One poor woman was cried said she burnt up all of things she said if she ketch him she would dinlt his heart, blood.

A scoundreal she said se could not tell what the North wanted of them, one half of the rebels does know what they are fighting for. They have been told we were coming to make slaves of them. The southern bills is made on such paper looks something like labels. The first glance I thought they were all labels, I had one bill but have lost it.

It was 5 cents payable in three years, nothing short of five dolls, one of the 25 Mass shot Gov. He left the camp 20 minutes before it was taken.

I wish we could caught his father, the bald devil, this is third time has been defeated day before yesterday. Part of the fleet went to take Plymouth and Edenton. We heard heaving guns this morning. They cannot stand our pills, the moment they hear the sound charge, then they say lads, do your duty. All through this battle very little firing charge close quarters is our play. They cannot stand still, they say, that all they can think of is pack of devils, do not care for life, horse & pitch if cannot fight with one end, talk the bestch nock those devils in the head. We took one Lieutenant wounded in the arm, he had on a uniform with Palmetto buttons.

Our Gen'l told him halt at once and past one solders coats, he could stand this. We have sent the prisoners to Fortress Monroe to be exchanged for the poor fellows that was at Bull Run. Yesterday we made wood chow, firing Washington Birth Day salute. It was not pleasant day, raining most of time.

William, you must excuse my poor spelling. It is hard work for me to try to write. It is dark there so much company in the cabin I have on board 20 wounded men, all slightly well soon be fit for duty.

Nothing alarming, some of them wanted to go yesterday in our hospital. We have 40 of the rebels wounded there is good care taken of them.

Better than with their own folks, they say, they cannot hardly believe the north people was so kind. I call the Rebel Army brutes. They have a great many wounded in with dead, some in the arm, some in leg we hauled out of this mud hole they suffocated. Excuse me not writing with if I had tempted to I could not resolve this, Yours, William H. When we take New Burn, I will write you. We are waiting for reinforcement they have 20 thousand men. Sometimes I will require this to protect us both. This item is in the category "Collectibles\Militaria\Civil War (1861-65)\Original Period Items\Other Civil War Original Items". The seller is "ivymontcpa" and is located in this country: US. This item can be shipped worldwide.