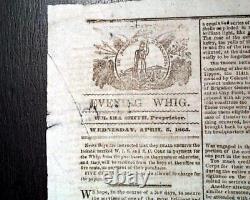 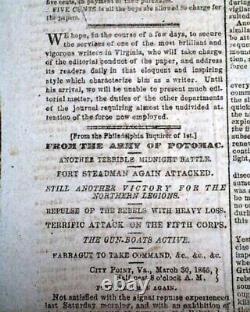 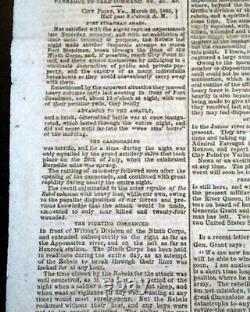 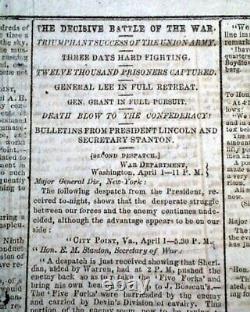 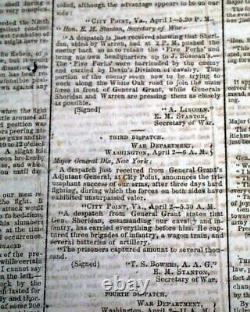 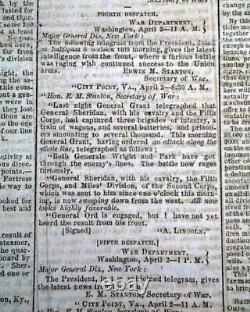 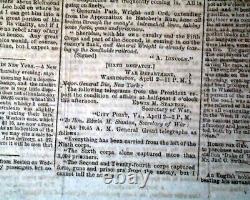 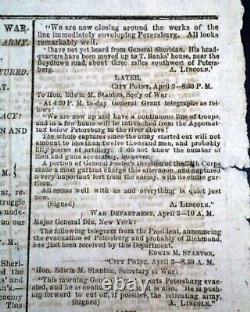 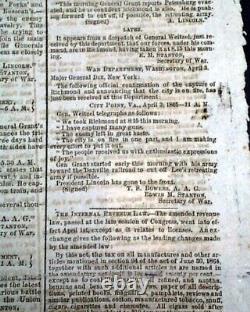 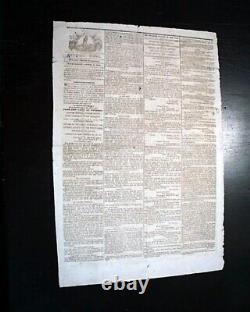 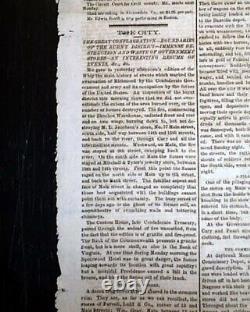 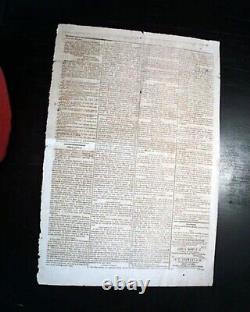 Offered is an original, historic, & collectible old newspaper: EVENING WHIG, Richmond, April 5, 1865. The fall of Richmond from the Confederate capital Extremely rare as such (historic).

It's always nice to get reports of famous events in newspapers from where the event occurred. Here is a terrific opportunity. This is a very rare Union occupation newspaper, as Richmond had just fallen to the Yankee forces on April 3. The issue of April 4 was the first produced by the Yankees. This is just the second.

The newness of the transition is evidenced with a report noting. We hope, in the course of a few days, to secure the services of one of the most brilliant and vigorous writers in Virginia who will take charge of the editorial conduct of the paper...

What then followed are column heads reporting the triumph of the Yankee army and the fall of the capital of the Confederacy, including: "General Lee In Full Retreat" and Death Blow To The Confederacy! " "The Decisive Battle of the War" "Triumphant Success of the Union Army" "Three Days Hard Fighting and more. Front page reports begin with events of March 30. Then printed are various dispatches dated April 1 and 2, the day before Richmond fell, including six which are signed in type by: A. Lincoln, and many by Secretary of War E.

Then the dispatches dated April 3 which include the very significant report from Edwin Stanton which reports the long-awaited historic news. The following official confirmation of the capture of Richmond & announcing that the city is on fire has just been received... We took Richmond at 8:15 this morning. I have captured many guns. The enemy left in great haste...

The people received us with enthusiastic expressions of joy... Some Richmond-related reports are on the back page, but the majority consume almost the entirety of the front page.

An exceedingly historic issue with the official dispatch. Complete as a single sheet issue with a one column masthead, minor wear at the central fold, generally in very nice condition. Please Note: All of our offerings are 100% authentic! We do not offer reprints or reproductions of any kind. They are guaranteed to be original! For this specific item, A U.

The per-item additional cost for folders, portfolios, and presentation cases vary. We will still provide tracking and insure them at our expense. Please check with your country's. We have been dealers in rare newspapers for over 46 years, serve as consultants to multiple museums, and are members of the American Antiquarian Society.

Timothy Hughes Rare Newspapers P. Desiring to conduct ourselves honorably in all things.

Were it left to me to decide whether we should have a government without newspapers, or newspapers without a government, I should not hesitate a moment to prefer the latter. This item is in the category "Collectibles\Militaria\Civil War (1861-65)\Original Period Items\Newspapers". The seller is "timhu" and is located in this country: US.