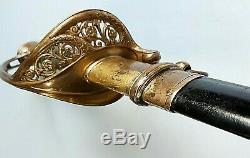 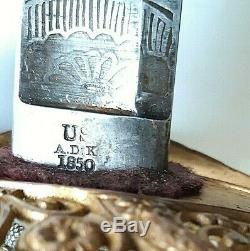 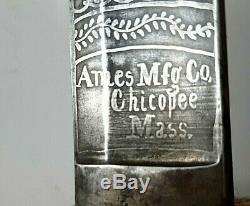 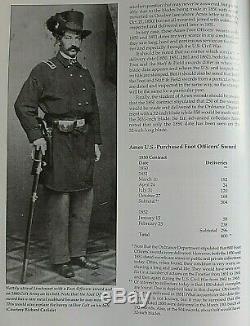 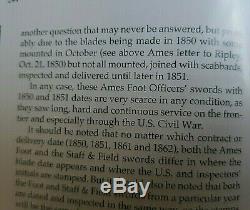 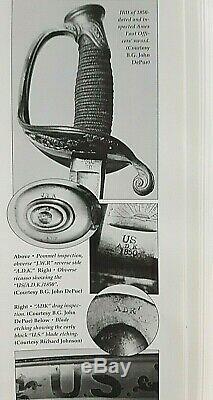 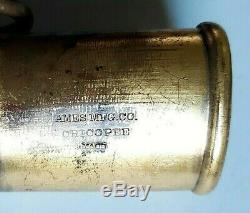 CIVIL WAR AMES M 1850 FOOT OFFICER SWORD DATED INSPECTED 1850 DELIVERED IN 1851, THIS IS THE RAREST AMES IN EXISTENCE IN ANY CONDITION. THE SCABBARD IS 85 % INTACT, MISSING THE DRAG.

IT IS ESTIMATED THAT LESS THAN 25 OUT OF THE 100 MADE AND DATED IN LATE 1850 ARE IN EXISTANCE, REGARDLESS OF CONDITION. An example of the RAREST Ames Foot Officer's sword- a government contract U. Pattern 1850 foot officer's sword actually made in 1850. The government contracted with the Ames company in 1850 for just 800 of this pattern, which were delivered from March 1851 through February 1852.

These were furnished in two lengths: 32 inches and 30 1/2 inches, as this one measures. Of the first group of 192 delivered on March 10, 1851, it is estimated that about half were made and dated in late 1850, thus making this one of less than perhaps a hundred swords so marked and dated. The brass hilt has an untouched, aged patina to the pommel and guard.

The guard is made in one piece, rather than spliced. Thillmann suggests this stronger type of guard on a foot officer's sword was intended for a lieutenant or captain who might serve mounted and may have been intended for use on the even more limited number of foot officer's swords provided with metal scabbards. The sharkskin grip wrap is present and complete, with little wear to the surface, but does have a shrinkage gap along the seam that is pretty common on these Ames products. As is correct for the earliest 1850 patterns, the seam is along the bottom of the grip.

The US/ADK/1850 inspection, acceptance and date stamps are very legible on one side of the ricasso with just a little rubbing to the "S" and D. The style of the firm logo on the blade is identical to the Ames Mexican War markings. The top of the pommel bears two sets of inspectors' initials. ADK and JMR are clearly visible. I have never previously had one of these "first batch" Ames martial Foot Officers' Swords.

About as rare as you can get with an Ames product. The item "CIVIL WAR AMES M 1850 FOOT OFFICER SWORD DATED INSPECTED 1850 DELIVERED IN 1851" is in sale since Wednesday, May 16, 2018. This item is in the category "Collectibles\Militaria\Civil War (1861-65)\Original Period Items\Edged Weapons". The seller is "rachelemandelgallery" and is located in Chicago Heights, Illinois. This item can be shipped worldwide.