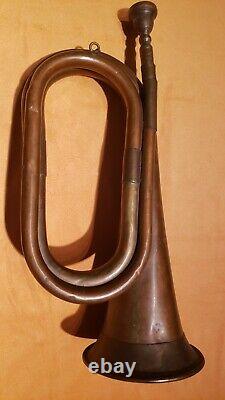 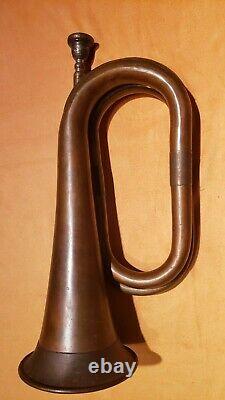 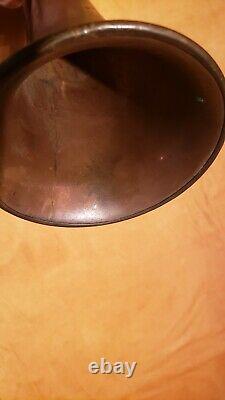 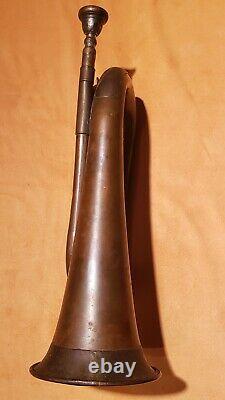 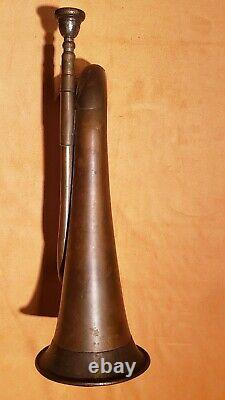 There were two principle Bugles used in the Union Army during the Civil War, the Clarion, single-coil and larger, and the Officers Bugle as it was referred to in iitary outfitter catalogs of the day, which were this smaller model. This model has also been labeled the "Model 1855", though the origins of this nomenclature are not known. As with the Clarion, they were made of either Copper, Brass, or German Silver (nickel). This one is made of copper.

They were made of two coil (as is this model), or three coil, and pitched in the key of C. Most, such as this one, have reinforced elbows and bells.

This particular model was in service prior to the Civil War, and continued into service up to the Spanish American war. The key to identifying whether the model is Civil War period or later, there are two keys, first is the crude seam, with a sawtooth, which I have pictured, and the second is the lack of the cord rings, which were a postwar addition. This model does have the sawtooth seam, and is absent the cord rings, as it should be.

There is a single smaller ring, but it is where a chain was originally attach to which the other end was attached to the mouthpiece. The mouthpiece is present on this model, though the attachment chain is absent. The argument that a distinction cannot be made between the Civil War and Indian War bugles is erroneous, simply because in the Indian Wars the United States Cavalry was still using the bugles made and issued during the Civil War.

This model is still reproduced today for reenactors, but the difference in patina and other features, like no "made in _____" stamps or maker's marks, and other features such as the seam, and welded later-dated insignia, make it readily obvious between originals and reproductions. The item "Civil War Bugle M1855 Officers Bugle" is in sale since Sunday, November 7, 2021. This item is in the category "Collectibles\Militaria\Civil War (1861-65)\Original Period Items\Other Civil War Original Items". The seller is "rogercillo" and is located in Wilmington, Delaware. This item can be shipped worldwide.