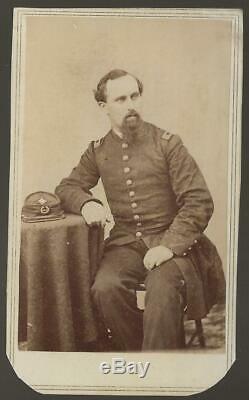 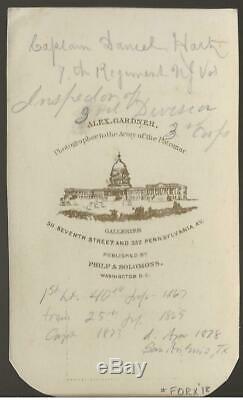 Daniel Hart , of the 7th New Jersey Volunteers posed for this wartime image seated in the studio of Alexander Gardner, Photographer to the Army of the Potomac, Published by Philip & Solomons, Washington, D. This is a nice image with Hart leaning on the table with his Kepi sporting a 3rd Corp badge. Captain Hart was the brigade inspector of the 3rd Division of the Corps. The 7th New Jersey participate in many battles including; 2nd Bull Run, Fair Oaks, Fredericksburg, Chancellorsville, Gettysburg (breveted for gallantry), The Wilderness where he was breveted for gallantry, and more. He attained the rank of Lt. After the war, he was commission a 1st Lt. In the 40th Infantry on January 1867, and transferred to the newly organized 25th U. Infantry (the last two regiments were Buffalo soldiers), in 1869, and commanded Company F until 1873. He died in San Antonio, Texan in 1878, and buried at Fort Stockton Cemetery. Hart saw a great deal of action in the Civil War and on the Frontier. Very good image quality, with clipped corners. The item "Civil War CDV Union LT Colonel Daniel Hart 7th New Jersey Vols, III Corps Badge" is in sale since Friday, April 17, 2020. This item is in the category "Collectibles\Militaria\Civil War (1861-65)\Original Period Items\Photographs". The seller is "civil_war_photos" and is located in Midland, Michigan. This item can be shipped worldwide.