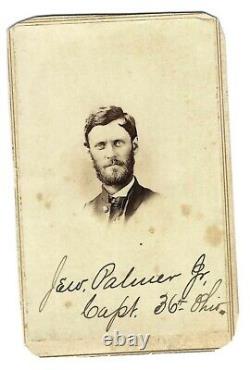 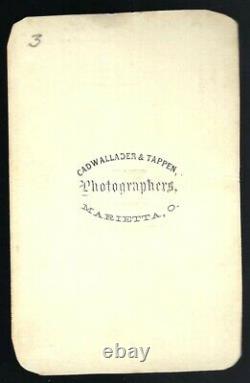 Residence was not listed; 21 years old. Enlisted on 8/24/1861 as a Captain. On 8/26/1861 he was commissioned into "G" Co. 5/9/1864 from company G to Field & Staff. Sources used by Historical Data Systems, Inc. Son of a noted conductor on the Underground Railroad in Washington County, Ohio, he served in Company B of the 90-day 18th Ohio early in 1861. He organized a company of men at Lower Salem - the Salem Light Guard - and enlisted them in the 36th Infantry in August 1861, being elected Captain of Company G. The rest of the War. He was promoted to Major of the Regiment in May 1864. He resigned his commission on 29 November 1864 and reenlisted as veteran.

He was Clerk of the Court 1871-72 and Mayor of Marietta 1874-78. He was practicing as an attorney there by 1888 - on the occasion of a Palmer family reunion, and still there at least until 1908, when he published a roster of survivors of the Regiment. The image of Palmer used here is from an imperial - an overpainted photograph - in the Larry M. Strayer Collection, published in Shenandoah 18641.

Military service details from the History of Washington County, Ohio (1881) transcribed online by Allen L. This item is in the category "Collectibles\Militaria\Civil War (1861-65)\Original Period Items\Photographs". The seller is "civil_war_photos" and is located in this country: US. This item can be shipped worldwide.