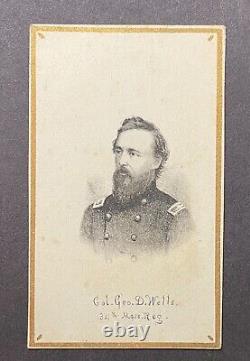 We are offering a CDV Engraving Image of Civil War Col. Wells, Commander of the 34th Mass. The 34th was organized in August of 1862, and under Wells' command the regiment was involved in many campaigns and operations until the end of the Civil War in 1865 - including Harper's Ferry, Cumberland, Maryland, raid on Lynchburg, Shenandoah Valley Campaign, Battle of Cedar Creek, Siege Operations against Richmond and Petersburg, Appomattox Campaign, Assault and Fall of Petersburg, and Pursuit of General Lee. The largest and bloodiest engagement in Clarke County, Virginia, the Battle of Cool Spring, left a lasting impression.

In July of 1864 under Col. Joseph Thoburn advanced to Island Ford (Shenandoah River), and as they were crossing the ford Confederate pickets from Maj. Jesse Richardson's 42 Virginia Infantry attempted to block Wells' advance but failed. Wells' troops captured 15 of Richardson's command including a captain during the crossing. After the ford was crossed, a bloody battle ensued, during which Union shells occasionally landed among Thoburn's command due to the closeness of Union and Confederate battle lines, resulting in the death of 65 of Thoburn's men, with another 301 wounded.

According to historynet, many veterans in Thoburn's command, who wondered if the sacrifice could have been avoided, "seethed with anger about what happened to them for decades". Secretary of War Charles A.

Dana wrote that what happened on the banks of Shenandoah River proved..... An egregious blunder" and "accomplished nothing. This item is in the category "Collectibles\Militaria\Civil War (1861-65)\Original Period Items\Photographs".