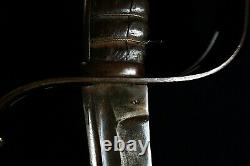 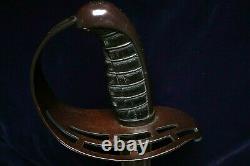 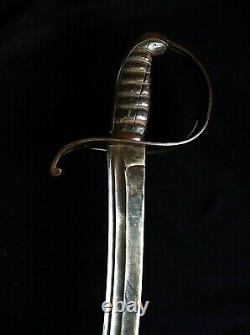 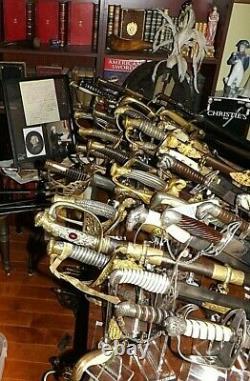 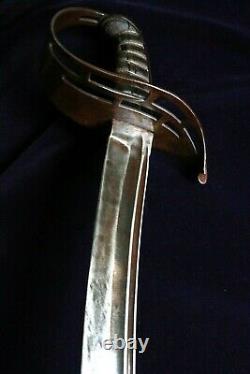 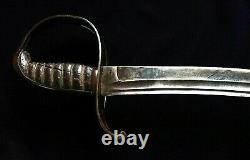 The blade has been shortened to32 inches by the state of Virginia for the Civil War. The original fuller remains intact from the ricasso to the end of the blade. The iron bird's head hilt has the usual half-basket sheet iron guard, which is perforated with 7 slots in its face, arranged in two rows, four on the outer edge and three on the interior. The sword knot slot remains in place at the rear of the knuckle guard as well.

The guard extends 2 inches above the spine of the saber, with a gently forward swept quillon that terminates in a slightly bird's head shaped flat quillon. The original leather grip is gone and the 7-groove wood grip has a nice patina with original wire. The blade is marked "5" for 5th. Cavalry on one side and "2" on the other, and has a few nicks on the blade battle related. Organized by expanding the 2nd Battalion Virginia Cavalry under the command of Colonel Thomas L. Clay Pate and Major J. The Cavalry Division of the Army of Northern Virginia was created under the command of Major General James E. The 5th Virginia Cavalry was assigned to the brigade of Brigadier General Fitzhugh Lee. Along with the 1st, 3rd, 4th, and 9th Virginia Cavalry and Breathed's Battery of Horse Artillery. From the War Department marker for F. The 3rd, 4th and 9th Virginia Cavalry of Lee's Brigade reached the field late in the afternoon of the 15th and took position on the extreme left of the Confederate Army. On the night of the 16th the Brigade was massed near the river in support of the Horse Artillery.

The 1st Cavalry, detached on the 10th, rejoined on the morning of the 17th and the Brigade took position on the left of Jackson's Command, which it assisted in resisting the Union advance. On September 18th and 19th the Brigade covered the withdrawal of the Army of Northern Virginia to the south bank of the Potomac. Lee's Cavalry Brigade, Stuart's Cavalry Division, Army of Northern Virginia. Battle of Kelly's Ford. He would be out of action until the Gettysburg campaign.

The regiment brought about 150 men to the field under Colonel Rosser. From the monument to F. The Battalion being on duty with Ewell's Corps the Brigade brought only five regiments to this field where it arrived soon after midday and took position on the left of Hampton's Brigade. On the edge of the neighboring woods. It participated actively in the conflict which ensued. Stuart's Cavalry Division was enlarged to a corps. Brigadier General Fitzhugh Lee was promoted to major general and given command of a division. The 5th Virginia Cavalry was assigned to the newly formed brigade of Lumsford Lomax in Fitz Lee's division.

Sheridan's Expedition to the James. Allen of Company H was promoted to lieutenant colonel. Battle of Trevilian's Station. The regiment, with Fitzhugh Lee's Division, was transferred to the Shenandoah Valley and assigned to Lieutenant General Jubal Early's Army of the Valley. Battle of Tom's Brook.

The brigade's men were disbanded to their homes to forage their mounts through the winter. The regiment re-formed and moved to the Richmond area. The army's cavalry cut their way through Federal lines and escaped.

Only two men were left to surrender with the army. The 5th Virginia Cavalry Regiment disbanded at Lynchburg. This item is in the category "Collectibles\Militaria\Civil War (1861-65)\Original Period Items\Edged Weapons".

The seller is "rachelemandelgallery" and is located in this country: US. This item can be shipped worldwide.