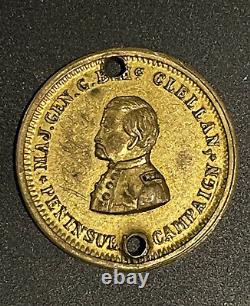 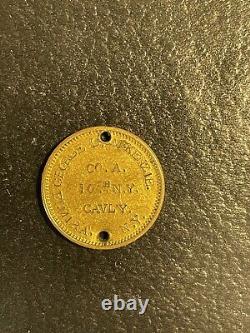 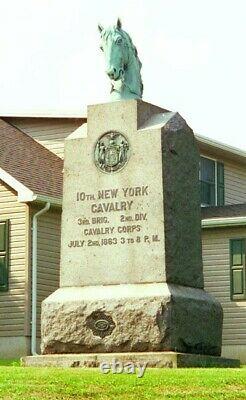 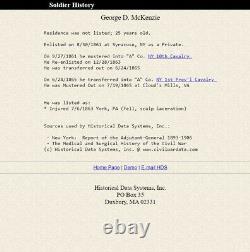 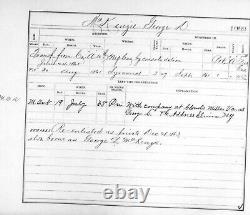 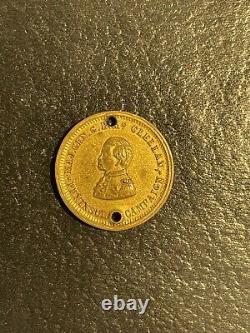 Listed as McClellan 1D in the Maier and Stahl book on Identification Discs of Union Soldiers in the Civil War and called Rare. Is a great little ID disc to Private George L. (Also borne as George D) McKenzie of the 10th New York Cavalry, Company A. McKenzie enlisted in August of 61 at age 25 in Syracuse.

Described as having brown eyes, dark brown hair, light complexion, 5 feet 5 inches tall. McKenzie would serve with this hard fighting regiment for the duration of the war, re-enlisting in December of 1863.

Double holed to keep secure while on horseback. The 10th was a hard fighting outfit.

Present at nearly all the Army of the Potomacs major engagements. Including: Fredericksburg, Brandy Station, Wilderness, Trevilian Station and a great many more.

In total they suffered 102 men and officers killed or mortally wounded and 149 of disease. A much higher toll than most cavalry regiments. Tag is in beautiful condition.

The brass remains shiny and has a nice gold tone. Disc comes with printouts of some of the research I've done on McKenzie. Whats unique about this disc is its (comparatively) tiny size, about the size of a penny. Interestingly, many of the penny size McClellan discs Ive found online were also owned by cavalry men.

This item is in the category "Collectibles\Militaria\Civil War (1861-65)\Original Period Items\Medals, Pins & Ribbons". The seller is "brcost-53" and is located in Boston, Massachusetts.