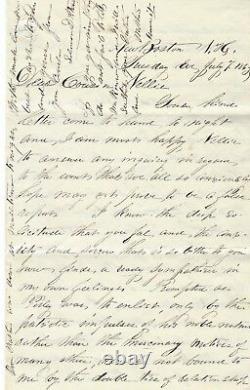 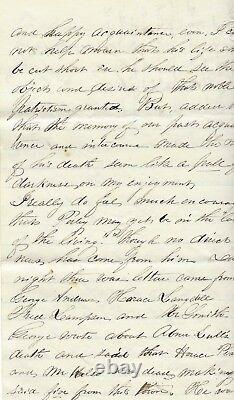 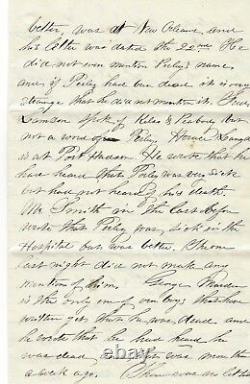 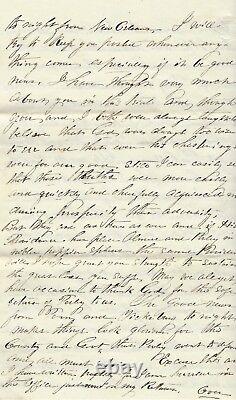 4 pp, 4 ½ x 7, New Boston [NH], July 7, 1863, Solomon D. Atwood, Postmaster and prominent Republican writes an interesting letter about the deaths of local soldiers, struggling, in part, to find out about one who may have been a relative and concluding with the success at Gettysburg and Vicksburg, which, makes things look glorious for the country. In part, Prompted as Perley was to enlist only by the patriotic impulses of his noble nature rather than the mercenary motives of many othersI could not help mourn that his life should be cut short in he should see the object and desires of that noble patriotismThe news of his death seemed like a pall of darkness on my enjoyment.. I really do feel much encouraged that Perley may yet be in the land of the living though no direct news has come from him. Last night there was lettersfrom George Andrews, Horace Langdell, Fred Samson and Abner Smith. George wrote about Abner Smiths death and said that Horace Peabody and Mr. Kelso was dead, making [it] five from this time. He wasat New Orleans and his letter was dated the 22.

He did not even mention Perleys name and if Perley had been dead, it is very strange that he did not mention it. Fred Samson spoke of Kilso & Peabody but not a word of Perley.

The item "Civil War Letter Postmaster Details Local Dead, Glorious Gettysburg, Vicksburg" is in sale since Monday, December 16, 2019. This item is in the category "Collectibles\Militaria\Civil War (1861-65)\Original Period Items\Correspondence, Mail". The seller is "bminnocci6mtm" and is located in Boston, Massachusetts.