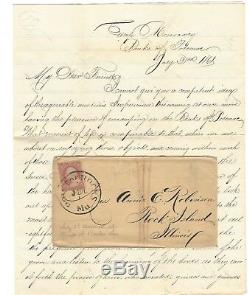 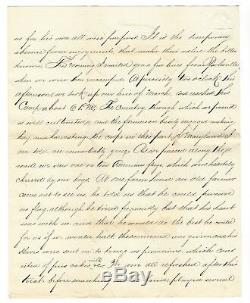 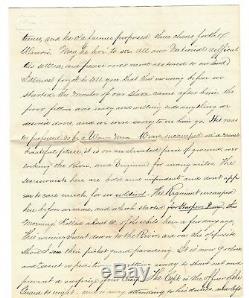 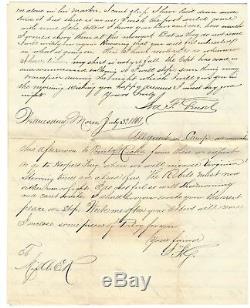 Of Doylestown, PA, enlisted on April 28, 1861 as a Private and was mustered in to Co. 4th United States Regular Infantry. He was wounded at Fredricksburg, Va and died of wounds on 12/28/62. He writes a superb and beautifully penned 4 pp, 7 ¾ x 10, letter to his friend Miss Annie E. Robinson of Rock Island, Ill, from Camp Monocacy on the Banks of the Potomac. In part: We took up our line of march and reached this camp about 6 P. The country through which we passed is well cultivated and the farmers are busily engaged making hay and harvesting. At one farm house an old farmer came out to see us. He told us that he could procure no flagthat his heart was with us and that he would do the best he could for us if we would halt. The command was given and his slaves were sent into bring us provisions which consisted of pies, cakes, milk etcbefore marching on the band played several tunes and the old farmer proposed three cheers for the Union.

May he live to see all our National difficulties settled and peace restored to our landBefore we started the master of our slave came after him. The poor fell was ready and willing to do anything we desiredand we were sorry to see him go. His master professed to be a Union manThe Secessionists here are bold and imprudent and don't appear to care much for us soldiers. The regiment encamped here before we came and which started for Harpers Ferrykilled about 60 of the rebelsa few days agoI went down to the river and on the opposite shore I saw their picket guard paradingA secret expedition is getting ready to start out and prevent a surprise of our camp.

William Watts Hart Davis, colonel 104th Penn. I have laid down and tried but there is no use[Jul 3d, 1861]all quiet in camp.

We march this afternoon to Point of Rocks from there we expect to go to Harpers Ferry when we will invade Virginia. Stirring times are ahead for us. The Rebels must now either run or fightIra F.

Our goal is to please every customer. We are pleased to be members of The Manuscript Society, Universal Autograph Collectors Club and The Ephemera Society. The item "Civil War PA Militia Invade Virginia Master Claims His Slave 60 Rebels Killed" is in sale since Friday, November 8, 2019. This item is in the category "Collectibles\Militaria\Civil War (1861-65)\Original Period Items\Correspondence, Mail". The seller is "bminnocci6mtm" and is located in Boston, Massachusetts.