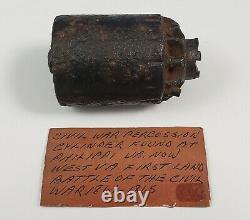 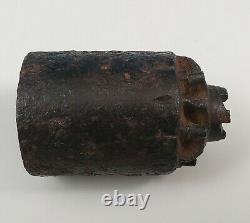 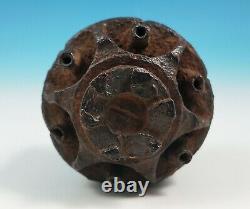 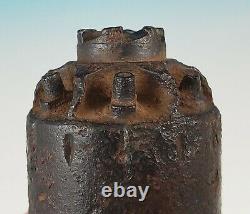 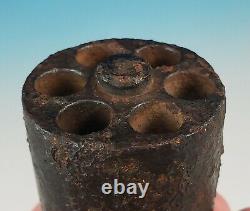 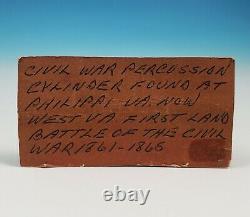 36 CALIBER STARR 1858 NAVY REVOLVER CYLINDER FROM BATTLE OF PHILIPPI IN WEST VIRGINIA. And around Philippi, Virginia (now West Virginia) on 3 June 1861. A Union victory, it was the first organized land action of the war. Although generally viewed as a skirmish rather than a battle, the Northern press celebrated it as an epic triumph and the publicity encouraged Congress to call for the drive on Richmond that ended with the Union defeat at the First Bull Run Battle in July.

It brought overnight fame to Major General George B. McClellan and was notable for the first battlefield amputations.

The Union victory was the first of a series of victories that pushed Confederate forces out of northwest Virginia, which allowed Unionists in Wheeling to continue organizing the Union government for Virginia, ultimately leading to the creation of the state of West Virginia. Apparently, it's from a rather scarce Starr 1858 Double Action. Rr Arms Company in New York circa 1860. It's rather unique and longer than most cylinders. Total length of the cylinder is approximately 2 5/8" and the diameter is about 1 9/16". The diameter of the shell chambers appears to be 0.38. There are no visible markings that I can find. The Starr 1858 double action.

36 caliber Navy revolver is scarce with only about 3,000 made. Many would end up on Civil War battlefields on both sides, brought along by the cavalry and infantry of both state and federal troop. It primarily saw use in the Western Campaign, which is consistent with where this cylinder was found.

The previous owner was a collector of many unusual items, including some Civil War relics. A note on the bottom of a box with the cylinder says that it was found on January 2, 1958. I don't know anything else about this item other than the information that accompanied the piece. I have no reason to doubt its authenticity and feel confident the information is accurate.

Condition of this percussion revolver cylinder is GOOD. It appears complete but obviously spent many years buried underground. Overall, this interesting piece displays well and would make a fine addition to any Civil War collection. Please take a close look at the many photos I've provided and judge condition for yourself. Relics from this important but obscure battle are very hard to find.

And finding a piece of a rare gun makes it even more special. Closeup of Percussion Cap End. Side View of Bullet Chamber End. If you have any questions regarding this policy, please let me know. I will insure this item at my own expense.

This item is in the category "Collectibles\Militaria\Civil War (1861-65)\Original Period Items\Other Civil War Original Items". The seller is "virginia_quailman" and is located in Waynesboro, Virginia. This item can be shipped worldwide.