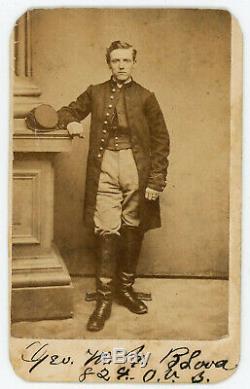 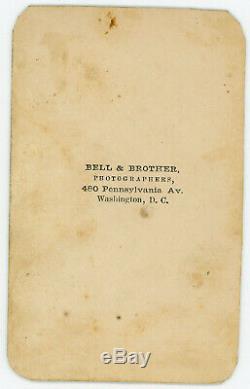 CARTE DE VISITE (CDV) OF A CIVIL WAR SOLDIER. Period ink identification is on the front of the mount.

This is shorthand for George W. That is followed by what appears to be: 82 __ O. This is indication of the 82nd Regiment Ohio Volunteer Infantry. We found the following on the American Civil War Database: George W.

Missing tip of lower right corner. No longer attached to mount at lower right. Scuffing on his cap and below. Soiling and foxing, front and back. We found this on the Civil War Index website: This Regiment was organized at Kenton, Hardin County, Ohio, from.

October to December, 1861, to serve three years. On the expiration of its term of service the original members (except veterans) were mustered out, and the organization, composed of veterans and recruits, retained in service until July 24, 1865, when it was mustered out in accordance with orders from the War Department. The official list of battles, in which this Regiment bore an honorable part, is not yet published by the War Department, but the following.

This item is in the category "Collectibles\Photographic Images\Vintage & Antique (Pre-1940)\CDVs". The seller is "genest" and is located in Jamaica Plain, Massachusetts. This item can be shipped worldwide.