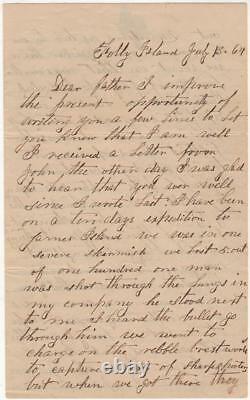 It is dated Folly Island July 13. The letter is in nice shape with splits beginning at the ends of its mailing folds.

Leavenworth relates his personal experience in the unsuccessful Union attempt to dislodge the Confederate defenders of Charleston from their positions on James and Johns Islands that was subsequently known as the Battle of Bloody Bridge. The letter is in nice shape and reads, in part. I have been on a ten days expedition to James Island.

One man was shot through the lungs in my company he stood next to me I heard the bullet go through him we went to charge the. Breastworks to capture a party of sharpshooters but when we got there they. Us two to one we come out of it quicker than we went in.

That night we stood in our rifle pits in mud and water half way up to our knees it was the filthiest kind of mud to the next day we stood in the rifle pits & the rebs began to shell us I was struck on the Leg by a. Of brimstone out of one of their shells it stung me like blazes I thought it was going to rain fire and brimstone. The 56th was in several engagements.

Under Hatch one was close to our Left. The rebels charged on hatches batteries but paid well for. Went off like whipt dogs there. Lots of reb women carrying off the wounded. Leavenworth also briefly discusses Charley Fremonts split from the Republican Party, the draft law, Shermans march in Georgia, and the 55th Massachusetts, a [prohibited word] regt [with] the best band I ever heard.

Leavenworths military records show that he died at his regimental hospital on Folly Island later that fall from disease and improper use of vinegar, perhaps the result of an infection from his shrapnel wound while fighting in the muddy rifle pit. In addition to the 55th Massachusetts, other regiments of U. Prohibited Word Troops participated in the Battle Bloody Ridge, and the 26th New York [Prohibited Word] Troops was given the honor of leading the assault on July 7th. Although their attack was initially aggressive, when the unit began to take fire they stopped still. Their lines begin to break and they ran in retreat.

The Confederates won the day. The artillery fire that injured Leavenworth probably occurred during a Confederate bombardment on July 8th.

After minor skirmishing on the 9th, the Union force withdrew to its stronghold on Folly Island. Sorry for the deletion of some words. View My Other Items For Sale. I know that this can be expensive, but I've switched to this method because I've had too many claims of non-receipt by international buyers. Please don't assume anything that is not specifically stated or shown on this listing page.

This is a Read'Em Again Books sale. Read'Em Again books is a member of the Antiquarian Booksellers Association of America (ABAA), the International League of Antiquarian Booksellers (ILAB), the Ephemera Society, the Manuscript Society, the American Philatelic Society (APS), the U. Philatelic Classics Society, and the Military Postal History Society (MPHS). We think that you'll find our prices to be very competitive with other internet book sellers. In addition to a nice selection of Americana, diaries, journals, photograph albums, and other unique personal narratives, we also maintain a small stock of children's books, illustrated books, unusual non-fiction as well as ephemera, philatelic items, prints, sheet music, maps, and occassionally postcards, antique toys & games, tobacciana, and breweriana. Auctiva offers Free Image Hosting and Editing. The item "Civil War Union Soldier's Letter Combat at Bloody Bridge Charleston SC, 1864" is in sale since Sunday, November 25, 2018.