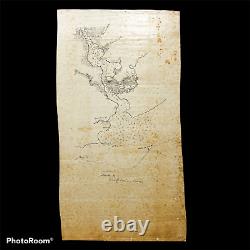 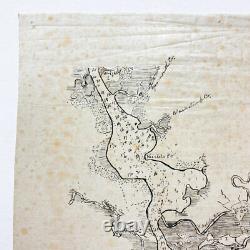 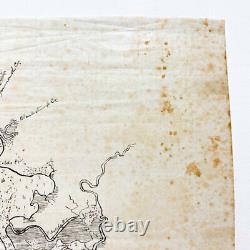 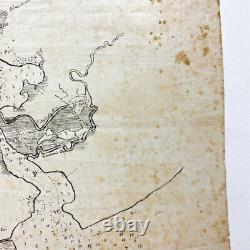 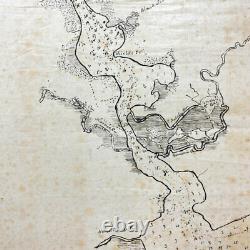 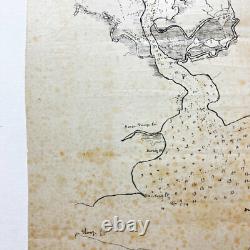 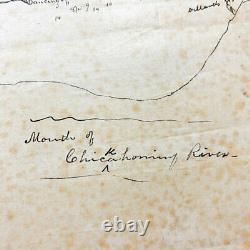 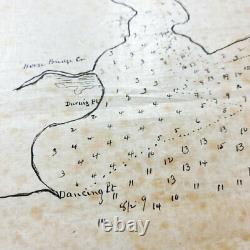 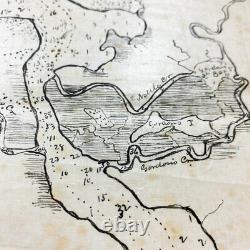 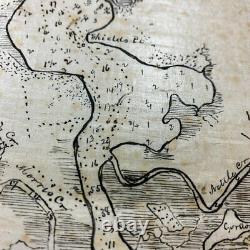 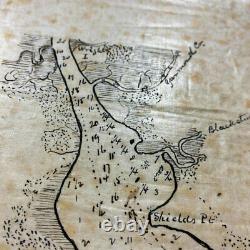 The USS Narragansett operated along the East Coast into the spring of 1860. On 31 March of that year she departed Norfolk, Virginia, for the Pacific, arriving at Valparaíso, Chile, 4 August. This map would make an amazing addition to any map or Civil War collections. This hand drawn Civil War era map charts the waters and land located near the mouth of Chickahominy River. This map includes important landmarks such as Wright Island, Yarmouth Creek, Black Stump Creek, Shields Point, Morris's Creek, Gordon's Island, Horse Bridge Creek, Dancing Point, Dillard's Wharf, and Sloop Point. The Chickahominy is an 87-mile-long river in the eastern portion of the U. The river, which serves as the eastern border of Charles City County, rises about 15 miles (24 km) northwest of Richmond and flows southeast and south to the James River.

During the American Civil War (1861-65), the upper reaches of the river became a major obstacle to Union General George B. McClellan's Peninsula Campaign, a failed attempt in 1862 to capture the Confederate capital of Richmond. Docile, narrow, and relatively easily crossed during dry weather, after periods of rain, the river expands across a flood plain with swamps as much as a mile across. The Chickahominy was in flood stage and divided the Union Army during crucial periods, despite continuous efforts by the United States Army Corps of Engineers to build and maintain bridges.

Other battles were fought nearby in 1864. Baja California, from Espíritu Santo Island to San Juan Nepomuceno Island. This map shows the rise and fall of the tides and included important landmarks and points including: Point Balandra, Port Balandrs, Pájaro Island, and Coyote Cove. The map is also signed'J. CHESLEY, USS Narragansett' near the bottom right. Full history of the USS Narragansett. The first USS Narragansett was a 2nd class screw sloop in the United States Navy during the American Civil War.

The Narragansett was built at the Boston Navy Yard, launched on 15 February 1859, and commissioned on 6 November 1859, Commander T. 15 December 1864, she departed the Eastern Pacific for the East Coast, arriving at New York City on 18 March 1865.

There she remained in ordinary for several years. Gulf of Mexico, 1869: Back in full service in 1869, she was ordered south, to cruise off the Cuban and Floridian coasts. In December, she sailed for the Southwest Pacific and an extended cruise through the Marshalls, Gilberts and Samoan Islands to Australia, arriving at Sydney on 2 April 1873. On her return from this cruise, the sloop was assigned the special duty of the survey and examination of steamer routes along the coasts of California and Mexico. While she was at Mare Island Naval Shipyard, California, in November 1874, Seaman Thomas Lakin jumped overboard and rescued two shipmates from drowning, for which he was later awarded the Medal of Honor.

This item is in the category "Collectibles\Militaria\Civil War (1861-65)\Original Period Items\Other Civil War Original Items". The seller is "premierrelics" and is located in this country: US.