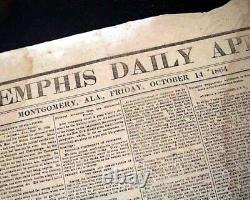 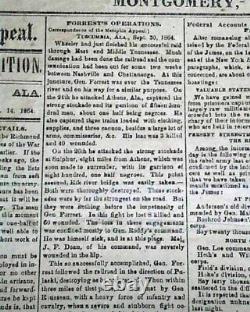 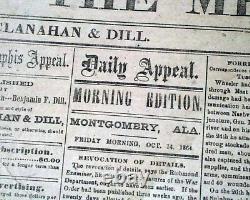 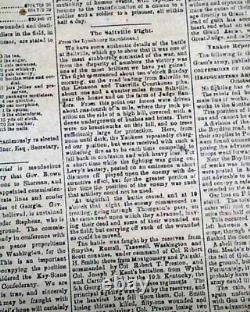 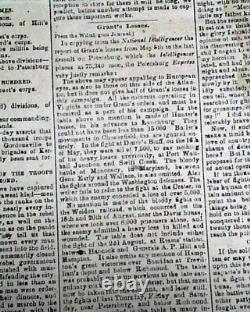 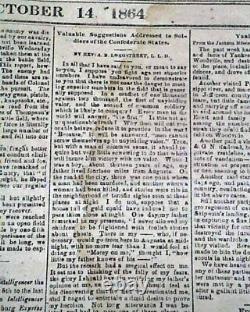 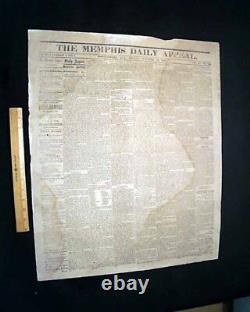 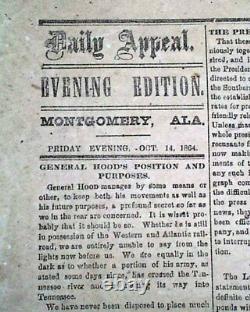 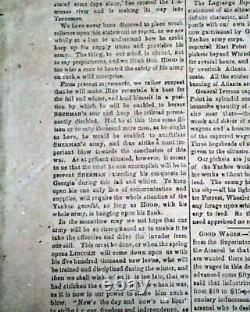 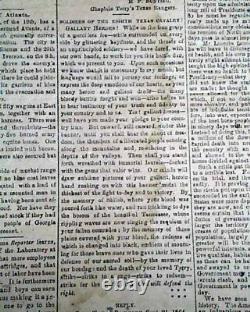 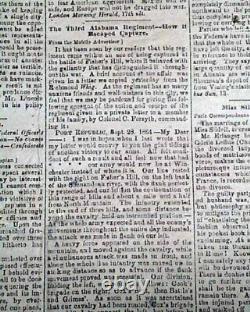 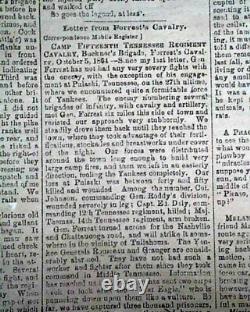 Shown is an original & historic old newspaper, offered to enhance your collectible interest: THE MEMPHIS DAILY APPEAL, Montgomery, Alabama, October 14, 1864. Very Rare Confederate title from the "traveling" newspaper Memphis newspaper printed in Montgomery, Alabama A wealth of Civil War related reporting. See the bottom of this listing for the fascinating history of this newspaper. Among the front page items are: Forrest's Operations" taking half a column; "The Saltville Fight" "Federal Accounts from the Richmond Front" "Grant's Losses" "Yankee Reports from Virginia" "Peace" "From the Front" "General Orders No. 10 and other war-related items.

The back page includes: "General Hood's Position and Purposes" "Something Reliable" "A Prudent Forecast" "The Third Alabama Regiment--How it Escaped Capture" "Letter from Forrest's Cavalry" "From Trans-Mississippi" "Reports from Georgia" Soldiers of the Eighth Texas Cavalry! Memphis was a Confederate stronghold up through the Battle of Memphis on June 6, 1862, at which time the Yankees moved in and it became a Yankee city. The "Memphis Daily Appeal", dedicated to the Southern cause rallying both civilians & soldiers, it was the most important newspaper of the region, soon famously known as the Moving Appeal. On June 6, 1862, the presses and plates were loaded into a boxcar and moved to Grenada, Mississippi, where it stayed for a few months, until approaching Federal troops threatened again, forcing a move in November 1862 to Jackson, Mississippi, where it published until May 1863, when Federal troops again arrived.

By this time, the Appeal had gained notoriety among Union forces as a rebel sympathizer while it remained on the run. The next stop was Meridian, Mississippi, from where, one issue and two days later, the wandering journalists moved on to Mobile, Alabama, then to Montgomery, and ultimately to Atlanta, the economic heart of the Confederacy. Its final move was to Columbus, Georgia, where Federal forces finally caught up with it.

It resumed publication following the war in Memphis on November 5, 1865. During just a four year period this newspaper published in nine different cities. (credit: Tennessee State Library & Archives) Complete as a single sheet newspaper, some damp staining but causing no loss, never bound nor trimmed, a discrete archival mend to the back page, generally quite nice condition.

A nice issue of a Memphis newspaper printed in Montgomery, Alabama, and one of only a few Montgomery imprints of this title we have. Please Note: All of our offerings are 100% authentic! We do not offer reprints or reproductions of any kind. They are guaranteed to be original!

For this specific item, A U. The per-item additional cost for folders, portfolios, and presentation cases vary. We will still provide tracking and insure them at our expense. Please check with your country's.

We have been dealers in rare newspapers for over 43 years, serve as consultants to multiple museums, and are members of the American Antiquarian Society. Timothy Hughes Rare Newspapers P. Desiring to conduct ourselves honorably in all things. Were it left to me to decide whether we should have a government without newspapers, or newspapers without a government, I should not hesitate a moment to prefer the latter. The item "CONFEDERATE Very Rare MEMPHIS TN at Montgomery Alabama Civil War 1864 Newspaper" is in sale since Wednesday, April 11, 2018.

This item is in the category "Collectibles\Militaria\Civil War (1861-65)\Original Period Items\Other Civil War Original Items". The seller is "timhu" and is located in Williamsport, Pennsylvania. This item can be shipped worldwide.