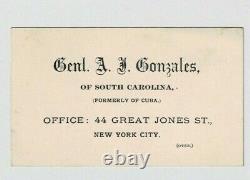 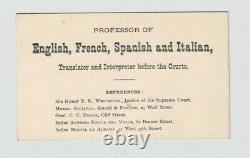 Cuban Revolutionary General who served as a Colonel in the Confederate Army during the American Civil War. GONZALES, OF SOUTH CAROLINA, (FORMERLY OF CUBA). ORIGINAL BUSINESS CARD advertising General Gonzales' services as "Professor of English, French, Spanish and Italian, Translator and Interpreter before the Courts".

Office: 44 Great Jones St. Is printed on the front. On the verso, the general offers his services as " Professor of English, French, Spanish and Italian, Translator and Interpreter before the Courts" followed by a list of references including His Honor T. Westbrook, Justice of the Supreme Court [of New York].

The edges of the card are slightly soiled with a tiny spot of soiling on the verso. He joined the Confederate Army as a Colonel during the Civil War, serving as Chief of Artillery in the Department of South Carolina, Georgia and Florida. Gonzales came to be remembered in South Carolina as a pioneering journalist who wrote sketches on the black dialects of the Gullah people of South Carolina and Georgia's Low Country.

All items are guaranteed authentic and as described. Be sure to add me to your favorites list. Check out my other items. This item is in the category "Collectibles\Militaria\Civil War (1861-65)\Original Period Items\Other Civil War Original Items".

The seller is "siberiandogs" and is located in this country: US. This item can be shipped worldwide.