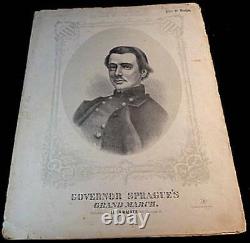 Governor Sprague's Grand March - Sheet Music - 1862. Governor Sprague's Grand March. Six pages including the cover. Portrait illustration of Sprague on the front cover. Once bound so slightly trimmed with a rough left edge. Small owner's stamp in upper right corner of the cover. William Sprague was the Governor of Rhode Island when the Civil War began, and although not a Republican, he pledged President Lincoln military support from his state. Following the shelling of Ft. Sumter, Rhode Island raised to regiments of infantry under the command of Colonel Ambrose Burnside. Sprague firmly believed that the war would be over in a matter of days once combat began, so he accompanied the state's regiments to the Battle of Bull Run where he served as an aide to Burnside and had his horse shot out from under himself while doing so.

Sprague remained loyal to Lincoln and attended the Loyal War Governor's Conference at Altoona, Pennsylvania in 1862 which, despite some contentious issues, reaffirmed support for Lincoln's management of the war and provided support for Lincoln to issue a preliminary emancipation proclamation decreeing that he would order the emancipation of all enslaved workers in any state that did not cease its rebellion against the United States before 1 January 1863. Shortly after the conference, Sprague resigned his position to run for the Senate in which he would serve for the next twelve years. This version of the sheet music is not listed in OCLC. I know that this can be expensive, but I've switched to this method because I've had too many claims of non-receipt by international buyers. View My Other Items For Sale.

Please don't assume anything that is not specifically stated or shown on this listing page. This is a Read'Em Again Books sale. Read'Em Again books is a member of the Antiquarian Booksellers Association of America (ABAA), the International League of Antiquarian Booksellers (ILAB), the Ephemera Society, the Manuscript Society, the American Philatelic Society (APS), the U.