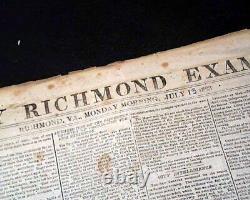 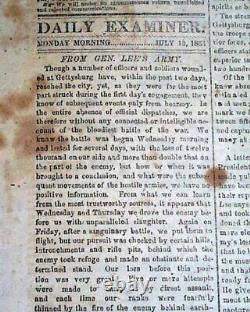 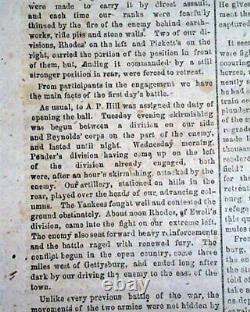 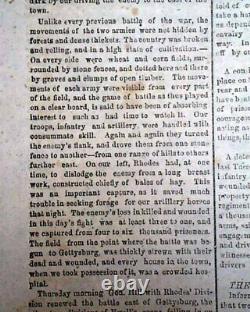 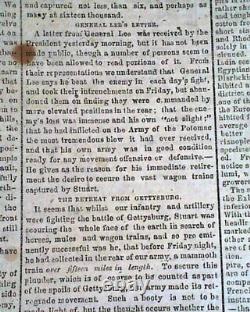 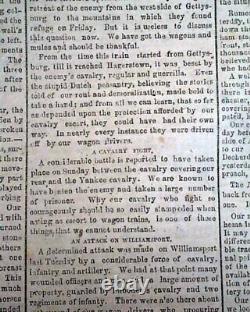 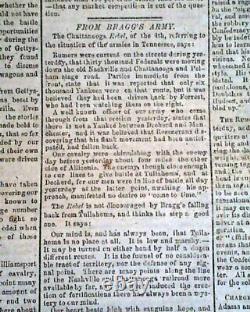 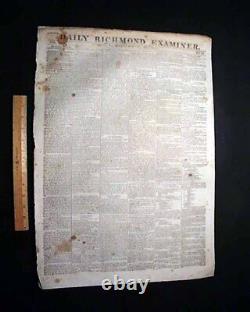 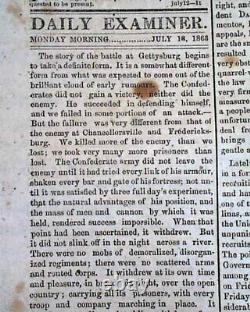 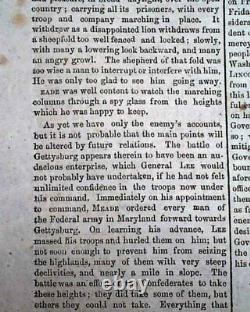 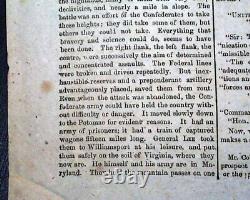 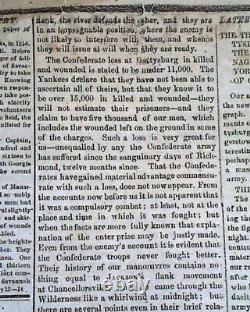 Great Battle of Gettysburg reporting Rare Southern point of view From the capital of the Confederacy. The front page has a very nice article taking the first 1 1/2 columns concerning the Battle of Gettysburg, certainly with a Confederate bias, headed: From Gen. Lee's Army which has some terrific content. Though a number of officers...

Struck during the first day's engagement, they know of subsequent events only from hearsay... We know the battle was begun Wednesday morning & lasted for several days... We put them to flight...

Our loss before this position was very great... From participants i the engagement we have the main facts of the first day's battle... And what follows are the details. There are several subheads in this account, one: "General Lee's Letter" which includes. We understand that General Lee says he beat the enemy in each day's flight & took their intrenchments on Friday...

That the enemy's loss was immense & his own'not slight'; that he had inflicted on the Army of the Potomac the most tremendous blow it had ever received... The next subhead is: "The Retreat From Gettysburg" with even more fine reading. As if this was not sufficient for one issue, page two has an editorial which comments on the recent battle of Gettysburg, beginning. The story of the battle at Gettysburg begins to take a definite form.

It is a somewhat different form from what was expected to come out of the brilliant cloud of early rumours. The Confederates did not gain a victory, neither did the enemy. He succeeded in defending himself & we failed in some portions of an attack...

We killed more of the enemy than we lost; we took very many more prisoners than lost. The Confederate army did not leave the enemy until it had tried every link of his armour... But even this is not the best report, as also on the back page is yet another terrific account of the Battle of Gettysburg with 2 2/3 columns (close to half the page) taken up with: "Latest News From The North" "The Three Days's Battle Before Gettysburg--A Complete Account of The Fierce Contest--Frightful Carnage--How Our Troops Behaved At York--Operations And Movements Of Our Army" which has an introductory paragraph which includes.

Nothing seems to be known of the movements of either army since the great struggle at Gettysburg & the retirement of Lee's army about Hagerstown, Md. We occupy our space with a very interesting account of the battle at Gettysburg--perhaps the most sanguinary one of the war--and a mass of other interesting intelligence of our army. There are various subheads throughout this lengthy account, the first being: "The Battles Before Gettysburg" which--not surprising being a Confederate newspaper--cautions the readers on what to believe, noting. The New York Tribune has a complete account of the three days' battles before Gettysburg... Cautioning our readers against believing too much of it, which, after all, is altogether unnecessary with any one who knows the unblushing & unscrupulous mendacity of that four sheet.

The great ambition of army correspondents generally is to excel in florid writing: their statements of facts are usually grossly exaggerated; they conceal much; they invent more... Incidents which they undertake to recount are entirely imaginary & without one word of truth... A truly terrific piece of editorial commentary which could only be found in a rabidly anti-Yankee newspaper.

What follows is the detailed account of the battles of Gettysburg, with subheads including: "The Battle of Wednesday" "Wednesday Night--The Battle of Thursday" "The Battle of Friday--The Final Struggle" then it follows with: "The Fall of Vicksburg In The North" and more. There is other reporting on the war as well, including "From Bragg's Army" "The Attack on Charleston--The Enemy Repulsed" which includes 3 dispatches signed: G. As was typical of Confederate newspapers in the latter half of the war this issue is a single sheet having a full, banner masthead. Some scattered foxing or browning but causing no loss of readability. Untrimmed margins, never bound, a few very tiny & discrete archival mends at the top margin on pg.

The "3" in the dateline is penciled in as the inking was very light. Generally in very nice, clean condition, much nicer than most Confederate newspapers. Certainly an issue for the best of collection.

Please Note: All of our offerings are 100% authentic! We do not offer reprints or reproductions of any kind. They are guaranteed to be original!

Please check with your country's. We have been dealers in rare newspapers for over 46 years, serve as consultants to multiple museums, and are members of the American Antiquarian Society. Timothy Hughes Rare Newspapers P.

Desiring to conduct ourselves honorably in all things. Were it left to me to decide whether we should have a government without newspapers, or newspapers without a government, I should not hesitate a moment to prefer the latter. This item is in the category "Collectibles\Militaria\Civil War (1861-65)\Original Period Items\Newspapers". The seller is "timhu" and is located in this country: US. This item can be shipped worldwide.