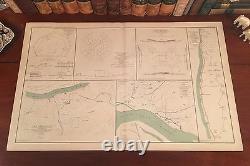 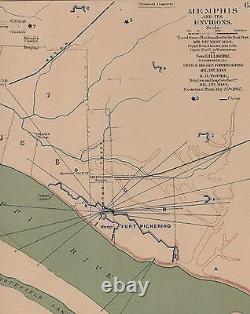 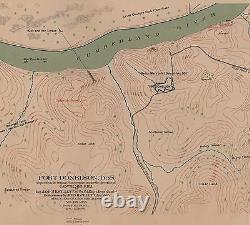 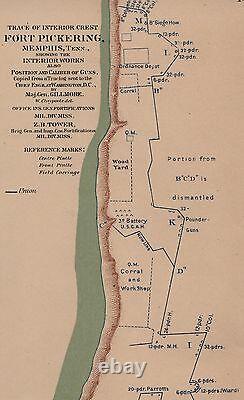 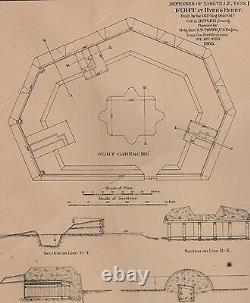 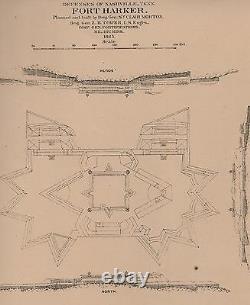 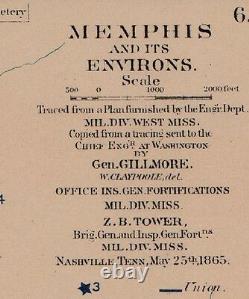 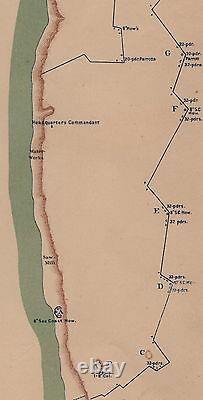 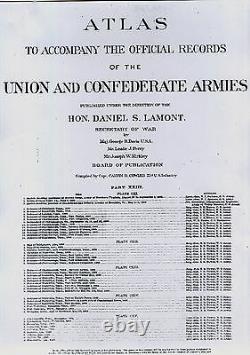 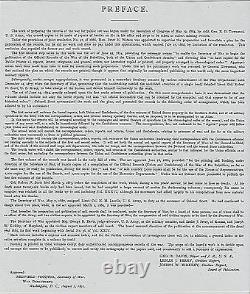 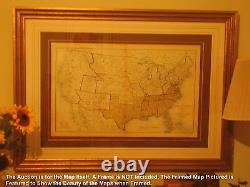 Impressive on any Home or Office Wall. Map of 1865 Memphis & Nashville Defenses May 25, 1865 Includes Fort Donelson, Fort Harker, & Fort Pickering Original Lithograph Plate CXIV (#114) of the 175 Plates of The Official Folio Historical Record of The Official Atlas to Accompany the Official Records of the Union and Confederate Armies, Ordered by Act of Congress in 1864; Entered into The Library of Congress; and Published by the U. Publishing Office, Containing all Battle Maps, Field Reports, Correspondence, Troop Positions, Skirmishes, Coastal Surveys, Naval Battles, and Topography during the Four Years of the War - The undertaking of Accumulating and Assembling The Atlas taking over 30 years to complete. Original Plate CXIV (#114) of the 175 Published. (1) Defenses of Nashville, Tennessee, Fort at Hyde's Ferry, Built by the 182nd Regiment Ohio Volunteers, Col.

" (2) "Defenses of Nashville, Tennessee, Plan of Section and Redoubt of North Side of Cumberland River, 3/4 Miles from the Railroad Bridge, Designed and partly built Under the Direction of Brig. " (3) "Defenses of Nashville, Tennessee, Planned and Built by Brig Gen. " (4) "Track of Interior Crest, Fort Pickering, Memphis, Tennessee, Showing Interior Works Also Position of Caliber of Guns, Maj. " (5) "Fort Donelson, Tennessee May 29, 1865. " (6) "Memphis and Its Environs.

Traced from A Plan by the Engineering Department, May 25, 1865. Map is in Very Good/Good condition. No soiling, marks, or writings. Closed separation along fold indentation previously repaired.

Original Lithograph Engraved by Julius Bien for the "The Official Atlas to Accompany the Official Records of the Union and Confederate Armies;" Commissioned by Resolution of Congress May 19, 1864, in accordance to serve as The Official Historical Record of the War. The Atlas Entered the Public Domain when the Atlases were withdrawn from Libraries and Other Federal Depositories over the past Century. Only 10,000 were Published, and Less than 1,000 Complete Atlases Remain. Impressive On Any Home or Office Wall Dimensions: 19 " x 29.5" Fine Adornment of Civil War History.

Great for Family History as Map Shows Towns & Landmarks during the War; Some of Which No Longer Exist Today. Map Shows Names of Citizens' Homes & Farms, Churches, Taverns, School Houses, & Many Other Landmarks. A Few of the Homes, Farms, Depots, Forts, Mills, Churches, & Other Landmarks located on the Map: Home of Stewart, Graveyard, Memphis & Tennessee Railroad, Morris' Cemetery, Market House, Winchester Cemetery, M&O Depot, Hopefield Lake, Court Square, Memphis Charity Hospital, St. The Atlas to Accompany The Official Records of the Union and Confederate Armies was Commissioned with Resolution of the U. Congress in 1864, by which Adjt. Townsend was Appointed Directorship of the Collection and Preparation of the Atlas, which was ultimately Completed and Published in 35 Parts in Sets of Five Lithographic Plates by the U. The 175 Plate Volume dedicated to Preserving a Historical Record of the War, each Map portraying a wealth of Knowledge and Information on Division, Corps, and Troop Positions; Battle Lines, Topography, and Military Strategy. A Frame is Not Included. The Framed Map shown is a Personal Lithograph of the Atlas Featured to Show the Beauty of the Maps when Framed. Greetings from Historical Savannah, Georgia: Founded 1733.

Some, to beautify their parlors, chambers, and libraries... Loveth, getteth, and useth maps, charts, and geographical globes. John Dee, Advisor to Queen Elizabeth I.

This item is in the category "Antiques\Maps, Atlases & Globes\North America Maps". The seller is "jonesjackson" and is located in this country: US. This item can be shipped worldwide. Official Records of The Civil War