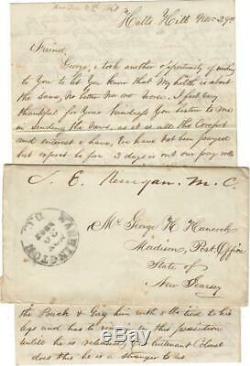 Letter from a Very Angry Union Civil War Soldier Camped at Arlington, Virginia. Letter from a very angry soldier who had reached his limit dealing with his Lieutenant Colonel, whom he described as a villain while ominously suggesting that there will be more officers shot than privates before this war is over. The letter is dated Halls Hill Nov 29th, and the envelope bears a circular Washington, DC postmark dated Nov 20, 186? The envelope is endorsed censored?

Along the top edge in a different hand, J. Both letter and cover are in nice shape. In this letter, Morrisey rants and complains about the leadership of his regiment, and it is clear the regimental officers had no clue as to how to deal with an ill-disciplined unit. Instead of working to instill discipline, they implemented harsh measures that severely punished all of the soldiers both physically and mentally.

We had a mutiny in camp, the boys threatened to shoot the Lieutenant Colonel and they pulled down the horse I previously mentioned. We have all new officers they are awful Sassy and Stiff, they say that they will cut the heads of us if we dont do as they tell us. Makes us rise out of bed some nights. Oh he is a villain you better believe. They will be more officers shot than privates before this war is over.

Bucking and Gagging was a painful torture frequently used to punish attempted deserters. A soldier would be forced to sit in the dirt and bring his knees up to his chest while his hands were brought around to the front where they were tied to his shins.

A stick or rod would be shoved over his arms but under his knees. He would be gagged, often with a stick, to force his mouth open and prevent tongue movement. The soldier might be left in this position for hours. It is unclear exactly what unit Morrisey belonged to or in what year this letter was written.

Many units at many different times were stationed in camps south of Washington, DC to protect the capital from Confederate attack. Halls Hill was in Arlington, Virginia. Military records identify several different soldiers named William Morrisey, but the most likely author of this letter was a Private William Morrisey. He enlisted in November 1862 and eventually served as a blacksmith in the 2nd Massachusetts Cavalry. That unit was stationed south of the Potomac River in defense of Washington from January 1863 through August 1864. Thie Private Morrisey in this unit deserted in February 1863. Halls Hill has an interesting post-war history. During the war, it became a collecting point for contraband, i. Escaped or freed [enslaved workers], who continued to reside there following the war. The community was walled off by the city of Arlington to ensure its African-American inhabitants could not mingle with white citizens. It was not until 1966 that the City of Arlington removed a section of the wall to allow free passage between Halls Hill and Arlington proper. Sections of the wall remain standing to this day. View My Other Items For Sale. I know that this can be expensive, but I've switched to this method because I've had too many claims of non-receipt by international buyers.

Please don't assume anything that is not specifically stated or shown on this listing page. This is a Read'Em Again Books sale.

We think that you'll find our prices to be very competitive with other internet book sellers. In addition to a nice selection of Americana, diaries, journals, photograph albums, and other unique personal narratives, we also maintain a small stock of children's books, illustrated books, unusual non-fiction as well as ephemera, philatelic items, prints, sheet music, maps, and occassionally postcards, antique toys & games, tobacciana, and breweriana. Get images that make Supersized seem small.