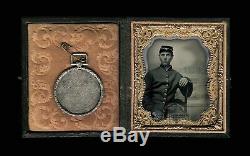 Original 6th plate, circa 1862/63 ambrotype of a Civil War soldier, with original marksmanship medal pinned to the pad. The medal ID's him as James Conway, 28th NYSM. The back of the medal is blank. Researching that name I found a record for a James Conway who served in the 131st NY Infantry, who was killed in battle on May 27, 1863 at the Siege of Port Hudson in Louisiana.

The only other James Conway I found in a New York regiment was in his 40's... Too old to be the soldier shown here.

The age of death given on the record is 18, but I've found that those are often a couple or few years off, based on an incorrectly estimated birth year. This is just a potential match that will require more research.

Note, the scan of the service record is provided for reference and a hard copy is not included. Ruby ambrotype comes in its full case behind mat and glass and is in very good to excellent antique condition, with a few small mat abrasions, as shown. Case is complete but the spine has been taped. International: Boxed & insured EXPRESS / insured / SIGNED. The item "Photo Young Civil War Soldier ID'd Marksmanship Medal Poss KIA 131 NY Infantry" is in sale since Thursday, April 9, 2020. This item is in the category "Collectibles\Militaria\Civil War (1861-65)\Original Period Items\Photographs". The seller is "jack_mord" and is located in Woodinville, Washington. This item can be shipped worldwide.