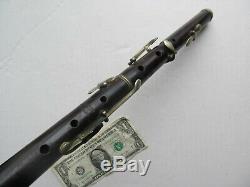 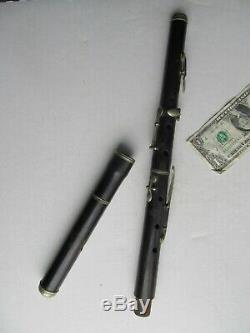 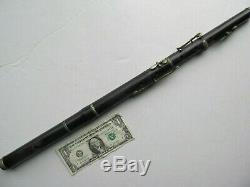 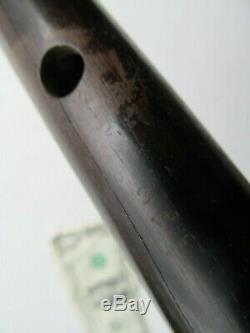 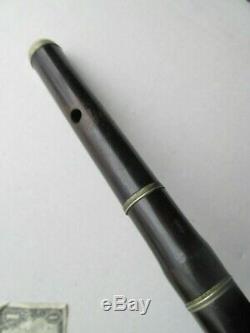 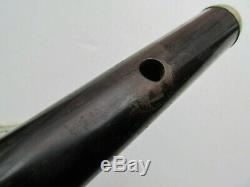 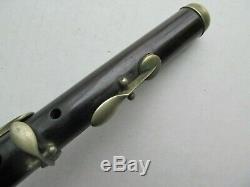 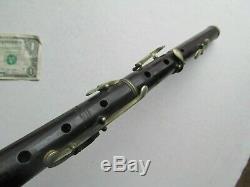 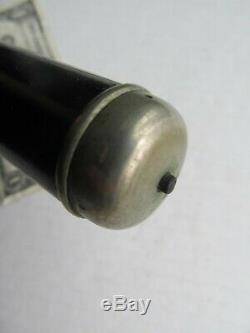 Very long and made to come apart in 2 pieces as shown. Slightly larger at the blow hole section, tapering slightly towards the end. Also has a bit of a flare where the 2 pieces come together. Besides the blow hole it has 6 holes spaced for fingering, like a fife. However, this also has a series of 6 springed keys as well. Still has the wooden plug inside, just above the blow hole to insure that the wind went in the proper direction, and still appears to be playable. Fifes were a popular musical instrument in every regiment. THIS IS A MUCH SCARCER INSTRUMENT THAN A FIFE, and may have been part of the regimental band. I have only seen several flutes from this period in 40 years of collecting.

Fife and flute music was lively and patriotic, and their sounds were very military and carried well across open fields. Stamped lightly just below the blow hole is "2 VT INF". This was an early regiment mustered in June 1861 and which was part of the famous Vermont Brigade.

It was a 3-Year regiment, and THE FIRST OF THE 3-YEAR REGIMENTS TO ANSWER LINCOLN'S CALL FOR 500,000 MEN and it served longer than all but one of the other Vermont units. It was organized from militia companies from Brattleboro, Burlington, Castleton, Fletcher, Ludlow, Montpelior, Tunbridge, Vergennes, and Waterbury. It was part of the 2nd Brigade, 2nd Division, VI Corps, in the LEGENDARY ARMY OF THE POTOMAC. The regiment participated in over 30 battles, including 1st BULL RUN, WILLIAMSBURG, 7 DAYS, SAVAGES, STATION, ANTIETAM, FREDERICKSBURG, SALEM CHURCH, GETTYSBURG, WILDERNESS, SPOTTSYLVANIA, COLD HARBOR, PETERSBURG, Ft. STEVENS, WINCHESTER, CEDAR CREEK, & SAILOR'S CREEK.

It would have been a great thing to hear the notes from this flute in their midst as they marched along!! The regiment was in for the entire war, and was not mustered out until July 1865. Of course, the role of the VERMONT BRIGADE and the 2nd VERMONT INFANTRY is famous for ITS COUNTERCHARGE AT THE HIGH WATER MARK AT GETTYSBURG, WHICH STOPPED THE THRUST AND POTENTIAL DANGER OF PICKETT'S CHARGE.

As you can imagine, you can't be involved in so many engagements without significant casualties. 5 MEMBERS OF THE 2nd VERMONT RECEIVED THE CONGRESSIONAL MEDAL OF HONOR; 139 killed in action; 692 wounded in action; 84 died of wounds; 136 died of disease; 129 taken prisoner (of whom 22 died in prison); 170 deserted; 3 died from accidents; AND 1 EXECUTED.

A great identified flute with A LOT OF GREAT MILITARY HISTORY, to add to any Civil War collection, and especially a collection of musical related items. VERY DIFFICULT TO FIND ANY IDENTIFIED INSTRUMENTS, ESPECIALLY GOOD ONES. This flute was nicely made.

It is long one and measures 23 1/2 long. One of the keys has a broken end and one needs a replaced spring, but otherwise in nice condition. A GREAT, RARE, IDENTIFIED ITEM, WITH A FANTASTIC HISTORY!

The item "Rare Civil War ID'D Military Wooden Flute, 2nd Vt Infantry, Musician, Gettysburg" is in sale since Friday, July 3, 2020. This item is in the category "Collectibles\Militaria\Civil War (1861-65)\Original Period Items\Other Civil War Original Items". The seller is "marvinsmom9" and is located in Hampden, Massachusetts. This item can be shipped worldwide.