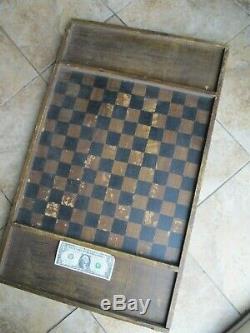 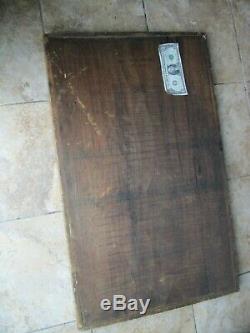 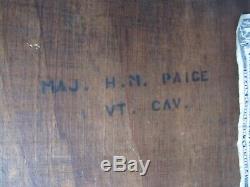 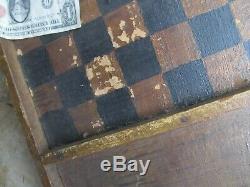 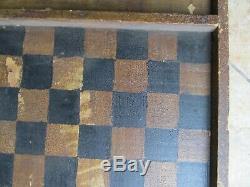 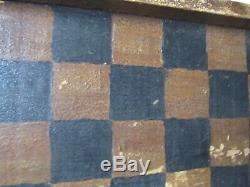 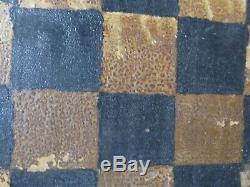 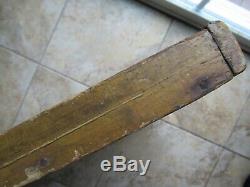 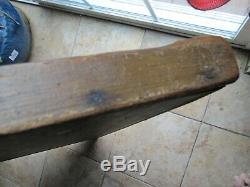 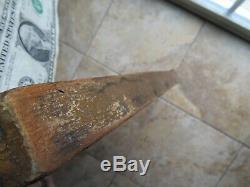 Civil War OFFICER'S CHECKERBOARD, 1st Vermont Cavalry. Very unusual IDENTIFIED Civil War officer's large camp checkerboard. Consists of a large heavy board, with a playing board in the center and "storage" areas on each end.

It has wood around the perimeter, for looks and support, which is attached with very old nails. On the back is also inscribed a parchesi board, although worn. This is a large board, which would have been very popular and used among offficers in camp settings during spare time.

BEST PART ABOUT THIS IS THAT IT IS IDENTIFIED ON THE BACK IN OLD STENCIL PAINT AS BEING OWNED BY MAJOR H. ORIGINAL, EARLY PAINT AS AN OFFICER WOULD HAVE USED ON PERSONAL ITEMS.

The checkerboard and the identification have great patina and appearance. Condition shows use and age, especially the paint on the checkerboard squares, and I would rate the board as very good overall. Again, it is large and measures 19. " x 31" x 1 3/8 thick.

It likely would have sat on a barrel top for use. Could have been part of a GAR POST exhibition/museum c. 1880-90 and used by the old veterans for many years after the war as well.

A very common thing that was done by the CW vets during the GAR years. The 1st Vermont had an active history in 76 engagements during the war in its time from 1861 to the end of the war, including the Shenendoah Valley, the Gettysburg Campaign, Yellow Tavern, the Seige of Petersburg, and the campaign leading up to Appomattox.

It endured 112 killed and mortally wounded, 159 died in Confederate prisons, 7 killed in accidents, and 114 died of disease. THIS IS A VERY NICE, VERY SCARCE CIVIL WAR OFFICER'S ACCESSORY WITH A GREAT HISTORY & USE WHILE WITH THIS CAVALRY REGIMENT. A NICE ADDITION TO YOUR COLLECTION OF CIVIL WAR OFFICERS AND PERSONAL ITEMS!!!

This would make a great display and collection centerpiece. It could tell some stories from the days in the camps as well as the days as part of the GAR collection. The item "RARE Civil War OFFICERS ID'D CHECKERBOARD, 1st Vermont Cavalry, PAIGE Gettysburg" is in sale since Monday, February 17, 2020. This item is in the category "Collectibles\Militaria\Civil War (1861-65)\Original Period Items\Other Civil War Original Items". The seller is "marvinsmom9" and is located in Hampden, Massachusetts. This item can be shipped worldwide.