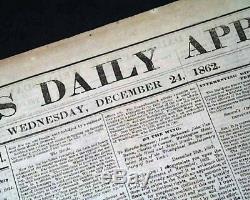 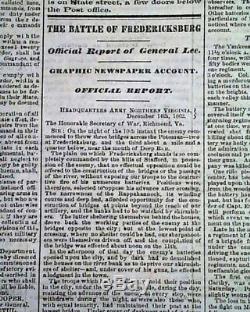 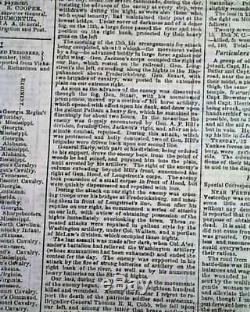 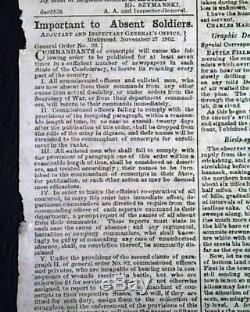 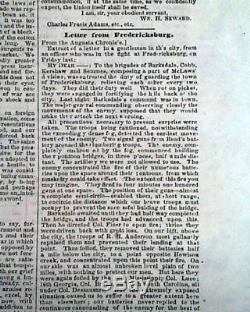 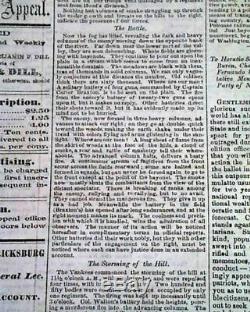 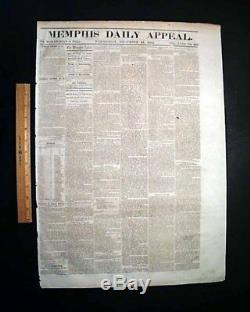 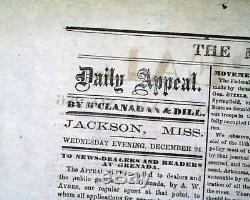 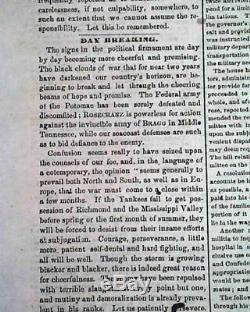 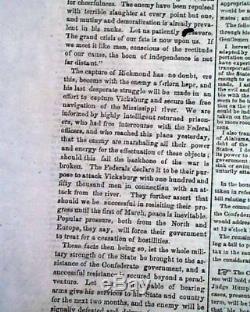 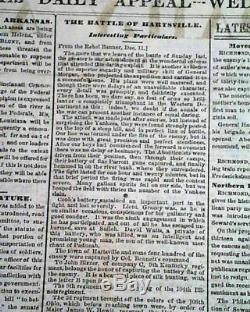 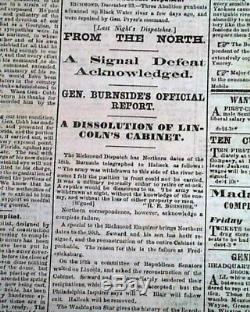 Rare CONFEDERATE Battle of Fredericksburg Union Defeat 1862 Civil War Newspaper. (Note: additional images are located below the description). Shown is an original & historic old newspaper, offered to enhance your collectible interest: THE MEMPHIS DAILY APPEAL, Jackson, Mississippi, December 24, 1862 Battle of Fredericksburg, Virginia Rare Confederate title Publishher on the run If the title and city of publication seem to indicate an error, but there is not one. This newspaper had a fascinating history during the Civil War.

Memphis was a Confederate stronghold up through the Battle of Memphis on June 6, 1862, at which time the Yankees moved in and it became a Yankee city. Being a strong voice for the Confederacy, the "Memphis Appeal" newspaper would not continue under Yankee control. On June 6, 1862, the presses and plates were loaded into a boxcar and moved to Grenada, Mississippi, where it published for some time. The Appeal later journeyed to Jackson, Mississippi, Meridian, Mississippi, Atlanta, Georgia, and finally Montgomery, Alabama, where the plates were destroyed on April 6, 1865, only days before the Confederate surrender, halting publication of what had been one of the major papers serving the Southern cause. So this one newspaper published in six different Confederate cities during the Civil War. The front page has nearly two columns with detailed text on: "The Battle of Fredericksburg" "Official Report of General Lee" "Graphic Newspaper Account" "Official Report" which includes the document signed in type: R. Among subheads in this report are: "Birds-eye View of the Battle Field" "Graphic Description of Saturday's Fight" "Particulars of the Death of General Cobb" "The Storming of the Hill" and "The Battle".

Are: "On The Wing" "Interesting Diplomatic Lecture" and "Letter From Fredericksburg" among other smaller items. There are also several military notices including: "Important to Absent Soldiers" (see). The back page includes an interesting & optimistic editorial headed: "Day Breaking" and beginning. The signs in the political firmament are day by day becoming more cheerful & promising. The black clouds of war that for near 2 years have darkened our country's horizon are beginning to break & let through the cheering beams of hope & promise.

The Federal army of the Potomac has been sorely defeated & discomfited.. with much more (see photos). Are: "The Battle of Hartsville" "Movements Against Arkansas" "The Right of Secession Admitted" "Glorious Intelligence" From the North--A Signal Defeat Acknowledged--Gen. Burnside's Official Report--A Dissolution of Lincoln's Cabinet and much more.

Complete as a single sheet newspaper of folio size, much Civil War reporting plus advertisements as well. A tiny worm hole near the center affects just 2 words, minor closes-trimming in the bottom portion of the back page leaf touches letters in ads only, otherwise in very nice condition. A rare opportunity for a Confederate newspaper printed in Jackson, Mississippi, its third city of publication during the Civil War. Please Note: All of our offerings are 100% authentic! We do not offer reprints or reproductions of any kind.

They are guaranteed to be original! For this specific item, A U. The per-item additional cost for folders, portfolios, and presentation cases vary. We will still provide tracking and insure them at our expense.

Please check with your country's. We have been dealers in rare newspapers for over 43 years, serve as consultants to multiple museums, and are members of the American Antiquarian Society.

Timothy Hughes Rare Newspapers P. Desiring to conduct ourselves honorably in all things.

Were it left to me to decide whether we should have a government without newspapers, or newspapers without a government, I should not hesitate a moment to prefer the latter. The item "Rare CONFEDERATE Battle of Fredericksburg Union Defeat 1862 Civil War Newspaper" is in sale since Friday, June 23, 2017. This item is in the category "Collectibles\Militaria\Civil War (1861-65)\Original Period Items\Other Civil War Original Items". The seller is "timhu" and is located in Williamsport, Pennsylvania.