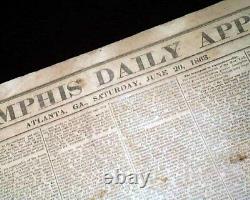 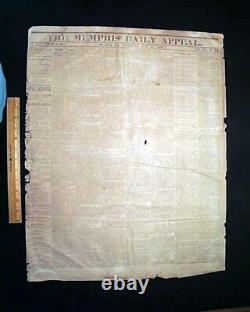 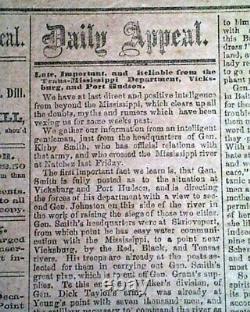 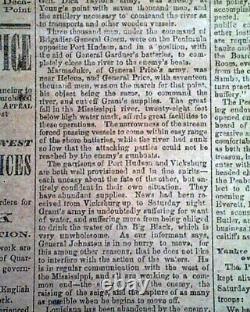 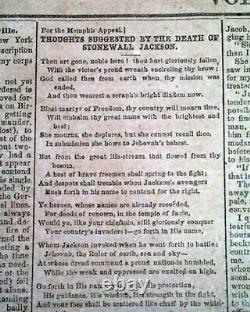 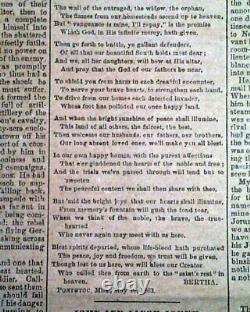 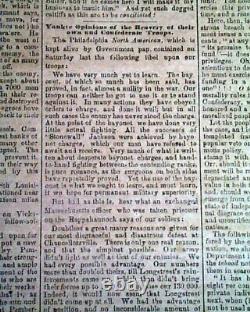 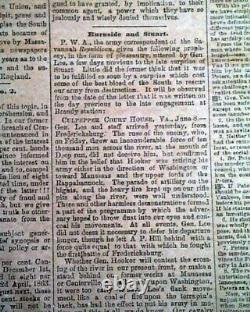 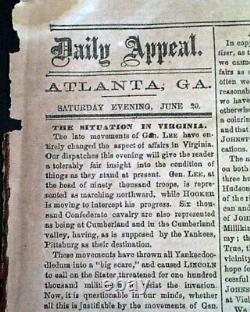 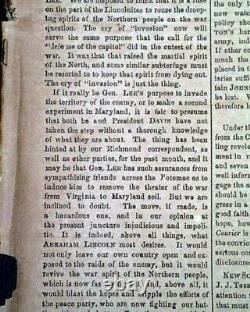 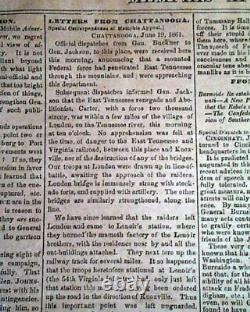 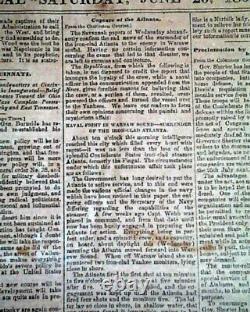 Rare CONFEDERATE Lee to Gettysburg & Stonewall Jackson Death 1863 Civil War News. (Note: additional images are located below the description). Offered is an original, historic, & collectible old newspaper: THE MEMPHIS DAILY APPEAL, Atlanta, Georgia, June 20, 1863 Very rare Confederate title Prelude to the Battle of Gettysburg On the death of Stonewall Jackson If the title and city of publication seem to be in conflict, they are not.

This newspaper had a fascinating history during the Civil War. Memphis was a Confederate stronghold up through the Battle of Memphis on June 6, 1862, at which time the Yankees moved in and it became a Yankee city.

Being a strong voice for the Confederacy, the "Memphis Appeal" newspaper would not continue under Yankee control. On June 6, 1862, the presses and plates were loaded into a boxcar and moved to Grenada, Mississippi, where it published for some time. The Appeal later journeyed to Jackson, Mississippi, Meridian, Mississippi, Atlanta, Georgia, and finally Montgomery, Alabama, where the plates were destroyed on April 6, 1865, only days before the Confederate surrender, halting publication of what had been one of the major papers serving the Southern cause. So this one newspaper published in six different Confederate cities during the Civil War. The front page includes: Late, Important, & Reliable from the Trans-Mississippi Dept.

Karle Van Dorn" "The Peace Movement" "The Stampede at Chancellorsville. Plus there is a nice poem titled: "Thoughts Suggested by the Death of Stonewall Jackson" (see photos). Has over half a column taken up with an editorial headed: "The Situation In Virginia" which begins: The late movements of Gen. Lee have entirely changed the aspect of affairs in Virginia...

Also: "From Vicksburg" "The Winchester Convention" "Letters From Chattanooga" "From Cincinnati" "Capture of the Atlanta" The Campaign On the River! " "Reported Advance of Lee Into Maryland and Pennsylvania" "Great Excitement Among Federal Officials! Which was Lee's advance towards the Battle of Gettysburg. Also on the bkpg: "Latest From the North" "The Movements into Maryland and Pennsylvania". A single sheet newspaper of folio size, irregular at the spine edge with many tears and some loss but only to advertisements, a small worm hole near the center. A rare opportunity for a Confederate newspaper printed in Atlanta Georgia, its fifth city of publication during the Civil War. Please Note: All of our offerings are 100% authentic! We do not offer reprints or reproductions of any kind. They are guaranteed to be original!

Please check with your country's. We have been dealers in rare newspapers for over 43 years, serve as consultants to multiple museums, and are members of the American Antiquarian Society. Timothy Hughes Rare Newspapers P. Desiring to conduct ourselves honorably in all things. Were it left to me to decide whether we should have a government without newspapers, or newspapers without a government, I should not hesitate a moment to prefer the latter.

The item "Rare CONFEDERATE Lee to Gettysburg & Stonewall Jackson Death 1863 Civil War News" is in sale since Friday, June 21, 2019. This item is in the category "Collectibles\Militaria\Civil War (1861-65)\Original Period Items\Other Civil War Original Items". The seller is "timhu" and is located in Williamsport, Pennsylvania.