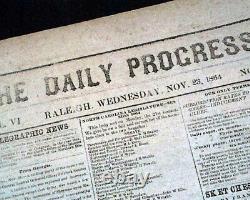 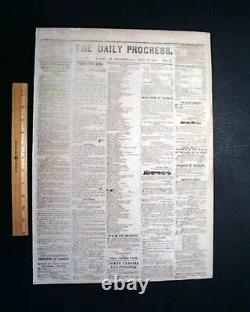 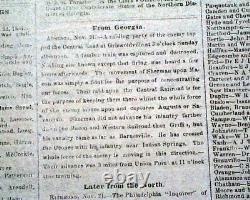 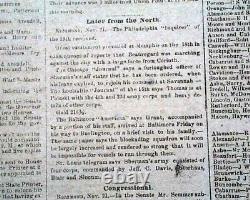 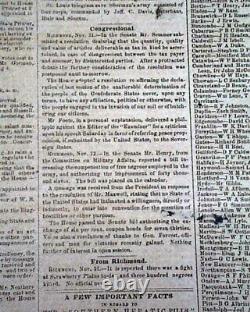 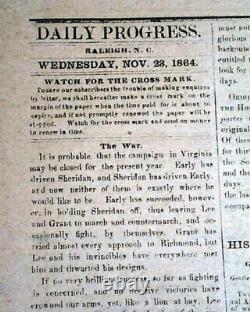 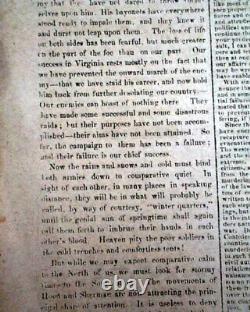 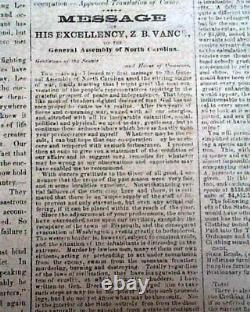 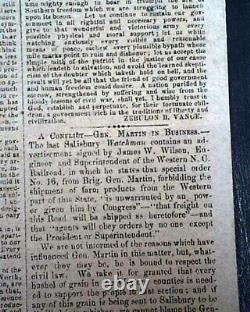 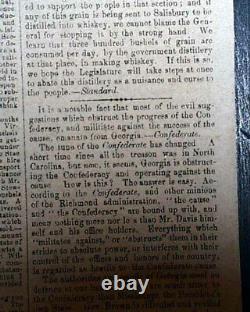 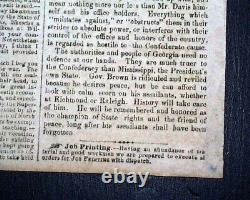 Rare CONFEDERATE Raleigh NC North Carolina CIVIL WAR Nearing End 1864 Newspaper. (Note: additional images are located below the description). Offered is an original, historic, & collectible old newspaper: THE DAILY PROGRESS, Raleigh, North Carolina, Nov. Rare Confederate title Civil War nears the end. Raleigh was one of the last major cities of the South to fall into the hands of Sherman, surrendering on April 13, 1865, just one day before Lincoln was assassinated. This rare Confederate title is from the latter months of the Civil War. The front page includes: "From Georgia" "Later from the North" has. Reports that Beauregard was marching against the city with a large force from Corinth... "Congressional" and a short bit: "From Richmond" which notes. It is reported there was a fight at Strawberry Plains today & three hundred negroes killed. There is a lengthy list of the: "North Carolina Legislature". Ads as well, including: "For the Soldiers" and "Boxes For Soldiers". The back page has a lengthy editorial headed: "The War" which begins. It is probable that the campaign in Virginia may be closed for the present year. Early has driven Sheridan, and Sheridan has driven Early... With much more good reading.

But the majority of page 2 is taken up with the: MESSAGE of His Excellency A. Vance to the General Assembly of North Carolina. Which is signed by him in type: Zebulon B. This is followed by two other interesting item, one beginning.

It is a notable fact that most of the evil suggestions which obstruct the progress of the Confederacy, and militate against the success of the cause, emanate from Georgia--'Confederate. The tune of the'Confederate' has changed... Complete as a single sheet newspaper which is typical for late-war issues from the South as most of the paper mills were in the North.

Folio size, a tiny hole near the center affects very little, in very nice condition. Please Note: All of our offerings are 100% authentic! We do not offer reprints or reproductions of any kind. They are guaranteed to be original!

For this specific item, A U. The per-item additional cost for folders, portfolios, and presentation cases vary.

We will still provide tracking and insure them at our expense. Please check with your country's. We have been dealers in rare newspapers for over 44 years, serve as consultants to multiple museums, and are members of the American Antiquarian Society.

Timothy Hughes Rare Newspapers P. Desiring to conduct ourselves honorably in all things. Were it left to me to decide whether we should have a government without newspapers, or newspapers without a government, I should not hesitate a moment to prefer the latter. This item is in the category "Collectibles\Militaria\Civil War (1861-65)\Original Period Items\Other Civil War Original Items". The seller is "timhu" and is located in this country: US.