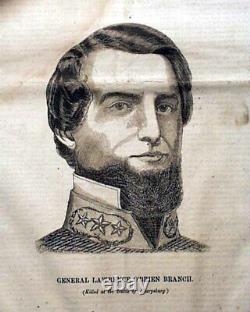 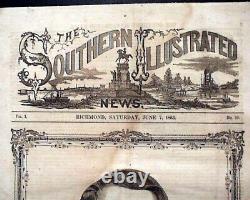 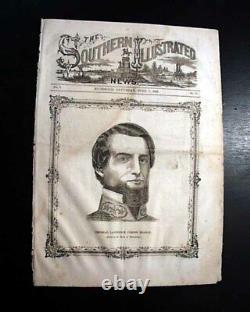 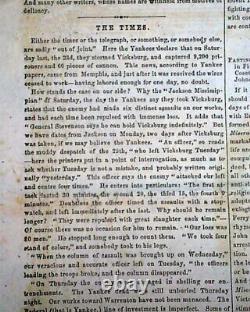 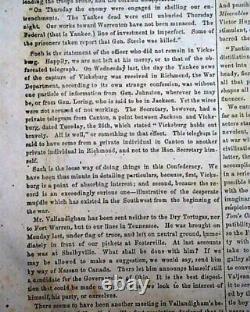 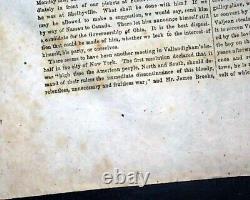 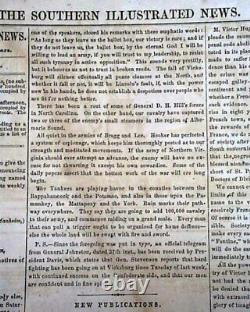 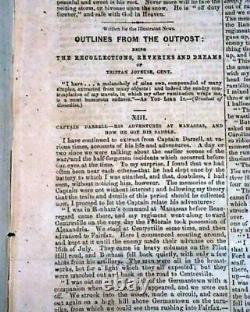 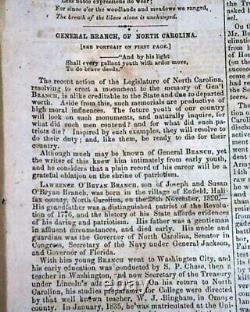 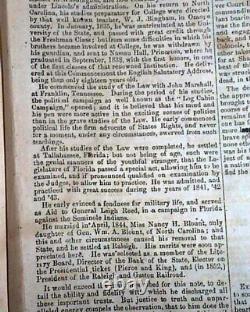 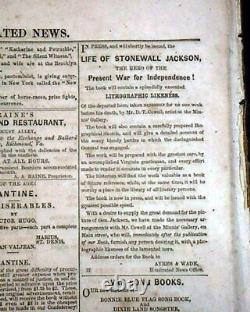 Although much of the content was literary in nature, there are news reports and a few illustrations. The front page is entirely taken up with a nice illustration of: " General Lawrence O'Brien Branch " beneath which is noted: "Killed at the Battle of Sharpsburg", with a biography of him taking close to half of page 7, focusing on his leadership in the on-going Civil War. Page 2 has a full column headed: "The Times" which reports on the latest news from the various war fronts. The Yankees declare that on Saturday last the 23d, they stormed Vicksburg & captured 9200 prisoners...

The'Jackson Mississippian of Saturday, the day the Yankees say they took Vicksburg, states that the enemy had made six distinct assaults on our works & had each time been repulsed with immense loss. Itg adds that'General Stevenson says he can hold Vicksburg indefinitely. There has been a rout of some of General D.

Hill's forces in North Carolina... All quiet in the armies of Bragg and Lee. Hooker has perfected a system of espionage which keeps him thoroughly posted as to our strength & meditated movements... The Yankees are playing havoc in the counties between the Rappahannock & the Potomac... Also in this issue is a story titled: "Outlines From the Outpost" which is a literary pieces with the Civil War as a backdrop.

Begun on September 13, 1862 the "Southern Illustrated News" sought to fill the void left when the Southern States lost access to Harper's Weekly and other illustrated newspapers from the North. In its "Salutatory, " in the first issue the editors state. We propose to issue an Illustrated Family Newspaper. Devoted to literature, to public instruction and amusement, to general news, and to the cause of our country in this trying hour when she is engaged in a terrible, but resolute and hopeful struggle for her liberty and independence... Although it could be argued it never lived up to all of these goals as reports from the war were very limited, it was an important publication nonetheless.

At its peak boasting as many subscribers as the largest daily paper in Richmond. The engravings were crude when compared to Yankee publications. Eight pages, never-trimmed margins, light damp staining, nice condition.

Please Note: All of our offerings are 100% authentic! We do not offer reprints or reproductions of any kind.

They are guaranteed to be original! For this specific item, A U. The per-item additional cost for folders, portfolios, and presentation cases vary. We will still provide tracking and insure them at our expense. Please check with your country's.

We have been dealers in rare newspapers for over 43 years, serve as consultants to multiple museums, and are members of the American Antiquarian Society. Timothy Hughes Rare Newspapers P. Desiring to conduct ourselves honorably in all things.

Were it left to me to decide whether we should have a government without newspapers, or newspapers without a government, I should not hesitate a moment to prefer the latter. This item is in the category "Collectibles\Militaria\Civil War (1861-65)\Original Period Items\Other Civil War Original Items". The seller is "timhu" and is located in this country: US.