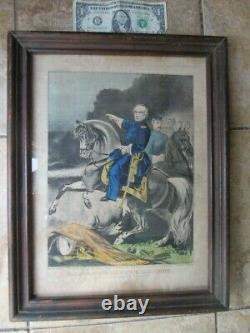 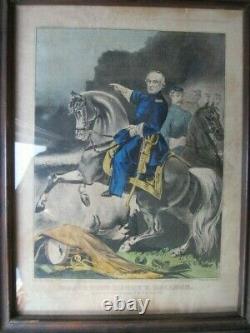 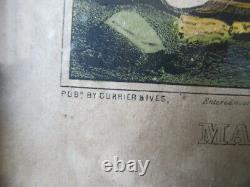 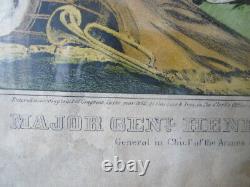 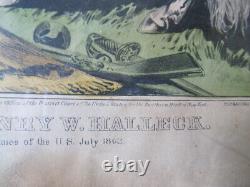 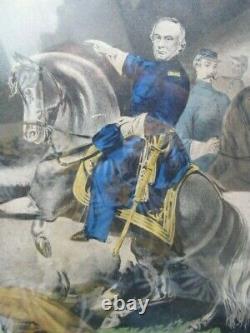 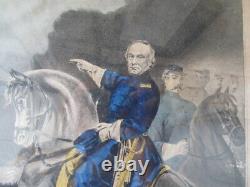 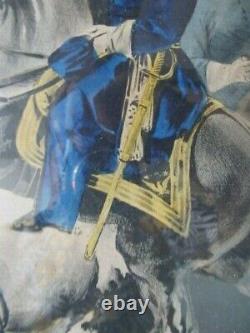 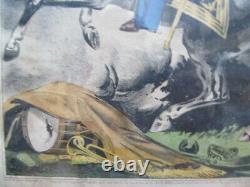 Very Rare, Very Early, Beautiful Tinted/Colored Antique Currier & Ives Patriotic Civil War Military Print of General Henry Halleck, STILL IN ORIGINAL PERIOD FRAME. A very rare antique Civil War CURRIER & IVES tinted/colored print of General in Chief Henry Halleck. Still in original large period antique frame. I have included a number of scans and apologize for the light reflection in some of them. VERY RARE TO SEE AN ORIGINAL CURRIER & IVES MILITARY RELATED PRINT, ESPECIALLY SUCH A STRIKING ONE OF HIM ON HORSEBACK IN BRIGHT BLUE UNIFORM WITH BRIGHT GOLD TRIM, SWORD, AND SADDLE BLANKET DECORATION, ETC. Gorgeous patriotic military related subject matter, especially with the GENERAL IN CHIEF OF THE ARMY, GENERAL HENRY HALLECK, PICTURED. Firm look of resolve on his face, and galloping/leaping horse. Also shows his staff in uniform in the background as well as marching soldiers and heavy black smoke of battle.

Also remains of battle, including swords and muskets and a bugle and a broken drum of battle on the ground in the foreground. A variety of nice colors, as bright as the day it was made. Entitled on the bottom Major Genl.

Halleck, General in Chief of the Armies of the U. Also on the left is the "Published by Currier/Ives" information.

WOULD HAVE BEEN QUITE SOMETHING IN ITS DAY, especially considering its display of patriotism for some northern family. Probably they had a son off fighting in the war. Still has the original glass and the original wooden back.

Don't usually see either! Scans show all the details. Has great eye appeal to decorate any period wall or collection/display of early CIVIL WAR PERIOD prints, frames and photos OR TO GO WITH A GENERAL COLLECTION OF MILITARY RELICS. GREAT EARLY SUBJECT MATTER, AND A GREAT LOOKING PATRIOTIC MILITARY CURRIER & IVES PRINT FROM EARLY IN THE WAR!!!

This print has it all!! This item is in the category "Collectibles\Militaria\Civil War (1861-65)\Original Period Items\Posters & Prints". The seller is "marvinsmom9" and is located in this country: US. This item can be shipped worldwide.