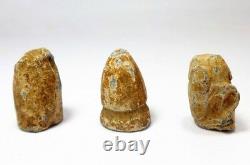 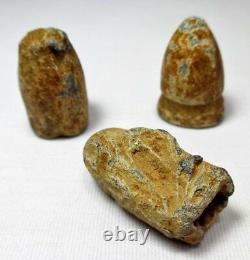 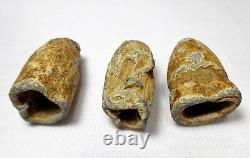 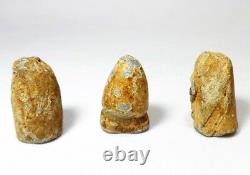 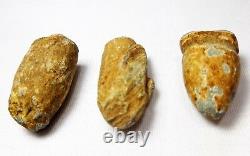 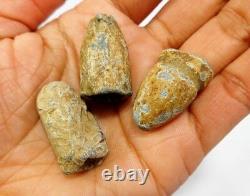 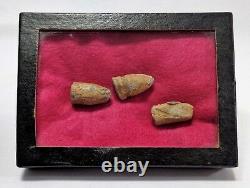 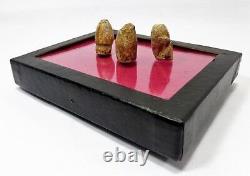 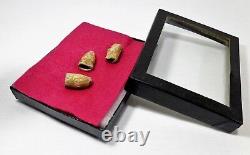 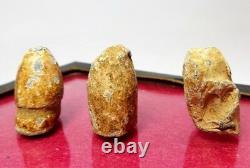 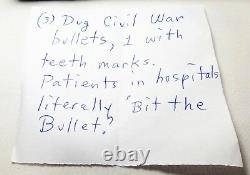 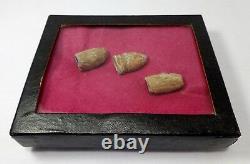 RARE MID-19TH CENTURY AMERICAN ANTIQUE EXCAVATED TRIO (3) OF US UNION ARMY CIVIL WAR LEAD BULLETS, ONE W/IMPRINTED TEETH MARKS FROM A WOUNDED UNION ARMY SOLDIER BITING ON IT DURING EMERGENCY FIELD SURGERY. US Civil War militaria & excavated battle artifacts. Each lead bullet measures an inch tall & half inch wide. This set of three excavated lead US Civil War bullets were apparently excavated in southern Pennsylvania and bear some of the hallmarks of US Union Army lead bullet recognizable characteristics. Miraculously, one of the lead bullets has imprinted teeth marks, undoubtedly used in one of the Union Army's field hospitals, during what undoubtedly was a Union Army medical amputation or impromptu emergency field surgery, without the use of anethesia, to try and save the life of a gravely wounded Union soldier.

To find one of these period US Civil War lead bullets with actual human teeth marks imprinted in it from undoubtedly a patient, being advised to'bite the bullet,' after also undoubtedly drinking alcoholic swill or whiskey (to dull his senses and to make what was going to happen next possibly more bearable and to lesson the sensation of excruciating pain) is a miraculous and not to be underestimated modern discovery. These three US Union Army lead bullets were excavated at the same time and to my knowledge, were left completely untouched and in 100% original condition, with soil residue and clay dust still impregnated in the lead bullet's textured surface. You don't have to be a US Civil War or militaria collector or specialist to understand how rare and important such a historic find truly is. You will look far and wide before you find this captured moment of our collective national history, ever again.

You don't have to be fan or aficionado of American history to immediately understand how rare and important such a discovery really is. Imagine the young soldier on ostensibly his death bed in a Union army field hospital, with his future and the hopes of his entire family, now resting in the hands of a Union army field surgeon. The drama and tension are almost too much to bear and this single bullet of three similar bullets excavated at the same site, tell a monstrous and yet wondrous tale, of when our nation was previously torn apart and only with tremendous, great human sacrifice, put back together. Very Good to Excellent overall antique condition.

This item is in the category "Collectibles\Militaria\Civil War (1861-65)\Original Period Items\Bullets". The seller is "modsanctuary" and is located in this country: US. This item can be shipped worldwide.