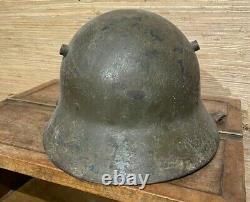 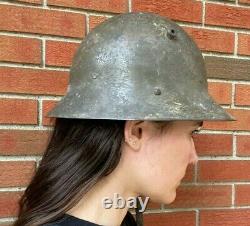 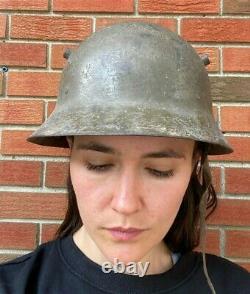 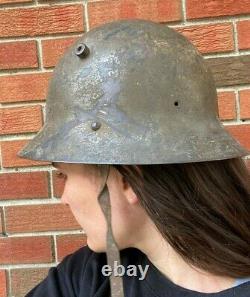 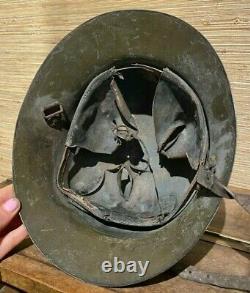 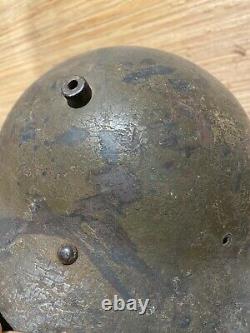 Rare WW2 Military Czech M30 Helmet Original Spanish Civil War. The outbreak of civil war within Spain caused a huge demand for helmets. Limited stocks of local manufactured helmets were quickly put to use by both sides in the conflict. Although believed to have been made for the Czech Army the M30 helmet was never issued.

Instead Czechoslovakia developed a new design with the M32 helmet. With the outbreak of the Spanish Civil war the Spanish Republican Government brought nearly all the stock of the M30 helmets that had been manufactured. During the civil war any captured helmets were used by both sides and hence Nationalist forces also used large numbers of M30 helmets. This example has survived the civil war and been repainted.

The original Czech liner remains with a Spanish chin strap. The M30 is notable for having two ventilation lugs similar to German helmets of WWI. Unlike the earlier German helmets the lugs where just intended for ventilation only and not to support any additional armor plate. The M30 is usual in that it can be worn with the lugs to the front as believed to be original design or with the lugs to the rear.

Period photos show the Spanish method of wearing the helmet was largely with the lugs to the rear. It includes the liner and chinstrap with buckles.

The item "Rare WW2 Military Czech M30 Helmet Original Spanish Civil War" is in sale since Sunday, September 5, 2021. This item is in the category "Collectibles\Militaria\WW II (1939-45)\Original Period Items\Other WWII Original Items". The seller is "cormeclair" and is located in Calgary. This item can be shipped worldwide.