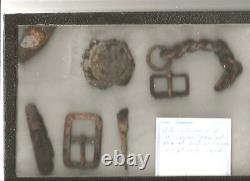 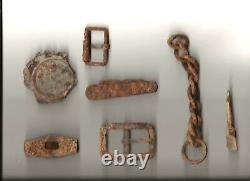 7 Dug relics from the 2nd Winchester Battlefield dug by Professor W Cullen Sherwood. Sherwood was a Geology professor with a lifelong passion for the history and material of the American Civil War. Growing up in rural Virginia his interest in Civil War Relics spanned his lifetime. He was well-known for his captivating field trips, where he would regale students with stories that linked the geologic landscape with Civil War troop movements and actions.

He developed his relic collection as a true scholar, studying maps and other archival information, combined with his extensive knowledge of the capabilities of various weapons, tactics, and movements. These dedicated, calculated studies led Dr.

Sherwood to many little-known Civil War Relic locations, where he enjoyed meeting private landowners while asking permission to access their property. Sherwood's material originated on private land. The Sherwood American Civil War Relic Collection is large and comprehensive, representing decades of careful, tireless study, and strong passion passion for the presevation of history. Part of the American Civil War.

4,000 missing or captured. The Second Battle of Winchester was fought between June 13 and June 15, 1863 in Frederick County and Winchester, Virginia as part of the Gettysburg Campaign during the American Civil War. As Confederate Lieutenant General Richard S.

This item is in the category "Collectibles\Militaria\Civil War (1861-65)\Original Period Items\Other Civil War Original Items". The seller is "civil_war_photos" and is located in this country: US. This item can be shipped worldwide.