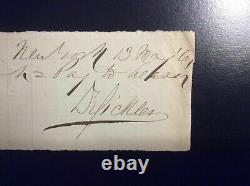 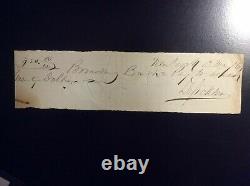 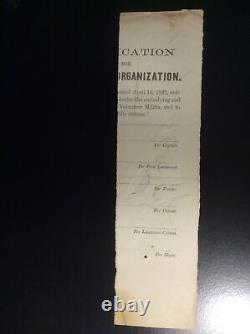 Shows some toning to right top edge and bottom left corner, else very good. Measures approximately 8" wide and 2" high. Daniel Edgar Sickles (October 20, 1819 - May 3, 1914) was an American politician, soldier, and diplomat. Born to a wealthy family in New York City, Sickles was involved in a number of scandals, most notably the public slaying of his wife's lover, Philip Barton Key II, a U.

Attorney and son of Francis Scott Key, whom Sickles gunned down in broad daylight in Lafayette Square, across the street from the White House. He was acquitted after using temporary insanity as a legal defense for the first time in United States history. This became a defense associated with'crimes of passion' (crime passionnel in French). Upon the outbreak of the American Civil War in 1861, Sickles became one of the war's most prominent political generals, recruiting the New York regiments that became known as the Excelsior Brigade in the Army of the Potomac.

Despite his lack of military experience, he served as a brigade, division, and corps commander in some of the early Eastern campaigns. His military career ended at the Battle of Gettysburg in July 1863, after he moved his III Corps (without orders) to an untenable position where it was virtually destroyed. He was wounded by cannon fire and had to have his leg amputated.

He was eventually awarded the Medal of Honor for his actions. Sickles devoted considerable effort to trying to gain credit for helping achieve the Union victory at Gettysburg, writing articles and testifying before Congress in a manner that denigrated the intentions and actions of his superior officer, the army commander, Maj.

After the war, Sickles was appointed as a commander for military districts in the South during Reconstruction. He also served as U. Later he was re-elected to Congress, where he helped pass legislation to preserve the Gettysburg Battlefield. A fantastic item for the collector of historical or military autographs! (Inventory: Autograph Closet Envelope 2). This item is in the category "Collectibles\Militaria\Civil War (1861-65)\Original Period Items\Other Civil War Original Items". The seller is "ron-likes-history" and is located in this country: US. This item can be shipped worldwide.