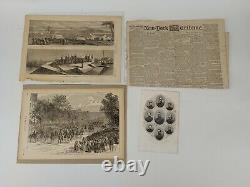 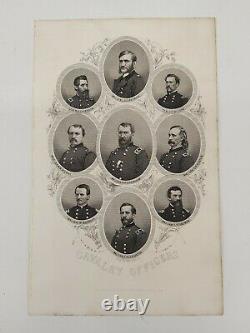 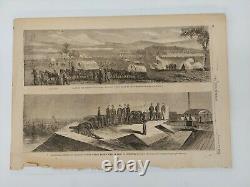 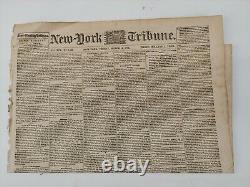 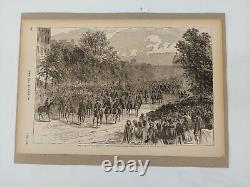 A set of four antique US Civil War related items, including three prints and an 1864 issue of the New York Tribune. An octavo sized print of an engraving excised from John Abbott's "The History of the Civil War in America" (1863 - 1866). It depicts the portraits of nine Union generals, including Sheridan and George Custer. In very good condition, with light age-toning to edges, and some residual from former binding along the left edge. An engraving extracted from "Harper's Pictorial History of the Civil War" (May 1865). The image depicts General Sheridan's cavalrymen marching through D. In very good condition, measuring 15.75" x 10.5". Moderate and uneven age-toning throughout. An engraving extracted from the November 12, 1864 issue of "Harper's Weekly". Two engravings appear on the sheet, one captioned "Valley of the Shenandoah - General Sheridan's Wagon Trains at Early Morning", the other "Secretaries Stanton and Fessenden Visiting General Meade's Works in Front of Petersburg".

Measures 15.75" x 10.5". Some light wear to edges, some chipping along former binding edge, and moderate age-toning throughout. The March 4, 1864 edition of the "New York Tribune", with the front page detailing war-related events (including of Generals Grant and Custer). Measures 20.5" x 16".

Moderate wear to vertical folding edge, minor wear to top edge, and some light foxing. This item is in the category "Collectibles\Militaria\Civil War (1861-65)\Original Period Items\Other Civil War Original Items". The seller is "ssbantiques" and is located in this country: US. This item can be shipped worldwide.