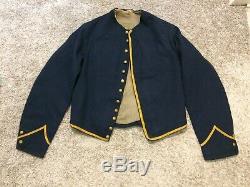 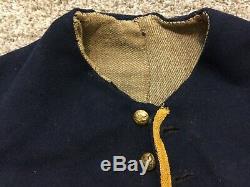 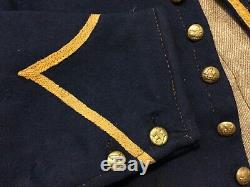 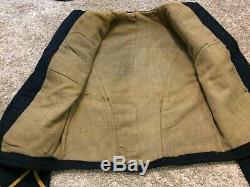 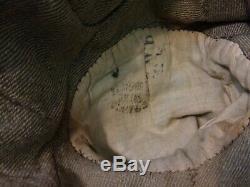 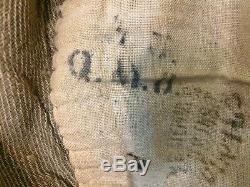 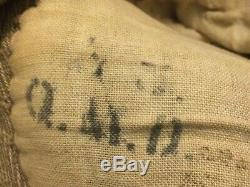 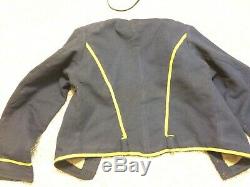 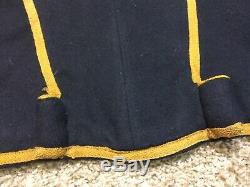 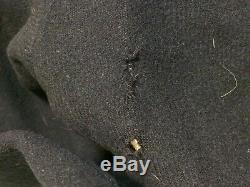 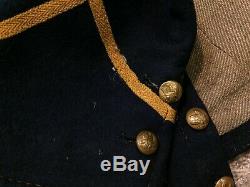 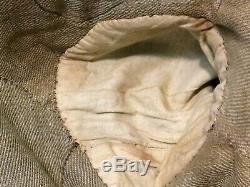 Original US civil war cavalry Cincinnati maker marked shell jacket shows wear and collar professionally removed. Has inspector markings in sleeve as well as possible solider initials what looks like earlier and over stamp O. SOme letters were bleeding and looks like Q due to the period over stamp of earlier initials and or M but Iit too looks like slanted earlier O initials made it llook like M. There is only one federal trooper in the cavalry with initials O.

I found a Oscar O. Enlisted in company M, seventh cavalry june 6 1863, mustered june 12 1863 , missing in action oct 19 1864 which was the battle at cedar creek a surprise attack left federal forces fleeing in confusion leaving uniforms and gear behind.

Its speculation but Michigan cav unit appeared to alter their jacket to low collars, The state also made jackets but come were made outside the state. Supplied all Michigan cavalry uniforms, but the uniforms came from different locations. For example the 1st Michigan Volunteer Cavalry Regiment received uniforms made in Cincinnati.

A discussion on the 1st Michigan Cavalry appears in Cavalry section. Some Michigan cavalrymen wore mounted jackets with a shorter collar with but one line of false button hole trim. Although it is possible that jackets with short collars were issued, it is also possible that the men in the photographs had their collars shortened. Interesting jacket with even wear, slighty faded from sun, may have evidence of rectangle shaped name tag to back(done by soldiers before battle).

Would look nice with a short collared vest. Definately used and not a surplus jacket. I offer 3 day inspection period with all my items. The item "US Federal Civil War Cavalry shell jacket possible ID solider in 7 mich cav" is in sale since Tuesday, February 18, 2020.

This item is in the category "Collectibles\Militaria\Civil War (1861-65)\Original Period Items\Uniforms". The seller is "jimmyz_thingz1870" and is located in Oldsmar, Florida. This item can be shipped worldwide.