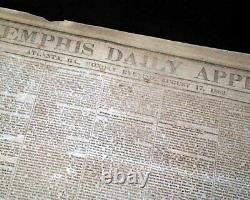 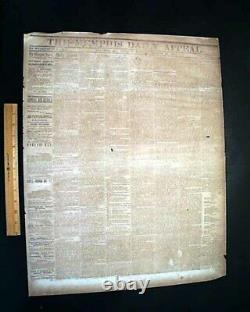 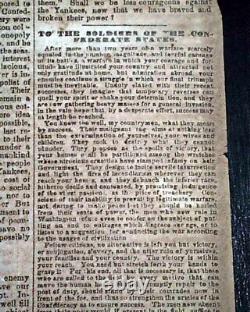 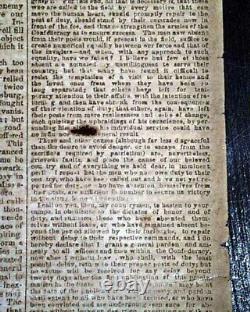 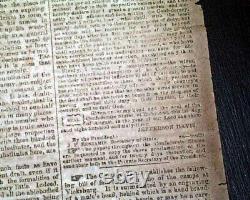 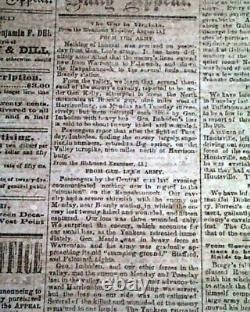 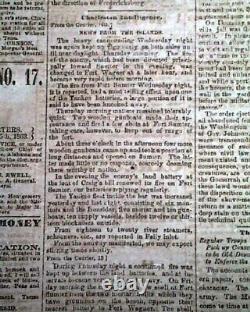 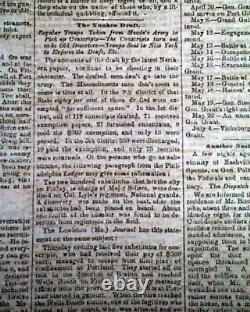 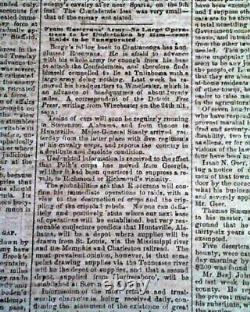 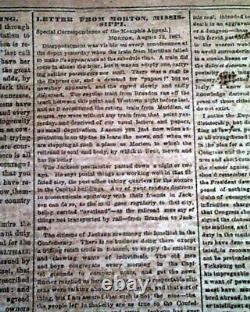 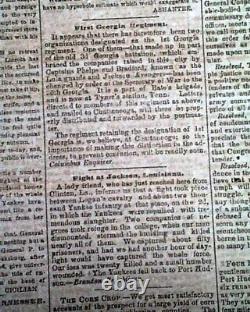 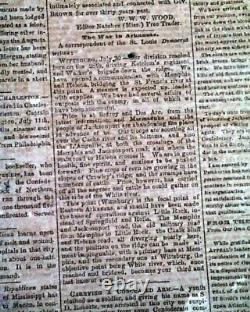 VERY Rare CONFEDERATE Memphis Civil War 1863 Newspaper w/ Publisher on the Run. (Note: additional images are located below the description). Offered is an original, historic, & collectible old newspaper: THE MEMPHIS DAILY APPEAL, Atlanta, Georgia, August 17, 1863 Very rare Confederate title See the bottom of this listing for the fascinating history of this newspaper. Among the front page items are: "The War In Virginia" From Gen.

Lee's Army" "Reported Fighting at Brock's Gap" "News From the Islands" "Tennessee Intelligence" "Fight at Sparta" "From Rosecrans' Army--No Large Operations To be Undertaken by Him--Some Raids to be Inaugurated" "The Siege of Vicksburg" "The Supply Of Men" "Another Nashvillian Arrested" "From The Trans-Mississippi and other items. But perhaps the best item in the newspaper is the lengthy front page letter: " To the Soldiers Of the Confederate States " in which he attempts to rally the troops. The photos show the full text, but a portion includes. What they mean by success.

Their malignant rage aims at nothing less than the extermination of yourselves, your wives, and children. They seek to destroy what they cannot plunder... Fellow citizens, no alternative is left you but victory, or subjugation, slavery and the utter ruin of yourselves, your families & your country. The victory is within your reach. You need but stretch forth your hands to grasp it...

The back page continues with much on the Civil War including items headed: "Blockade Running--The Evil Continued" "Georgians Drowned" "The War In Arkansas" "East Tennessee Rallying" "Letter From Morton, Mississippi" "Fight at Jackson, Louisiana" "First Georgia Regiment" "Spirit of the People in Mississippi" and even more. If the title and city of publication seem to be in conflict, they are not. This newspaper had a fascinating history during the Civil War.

Memphis was a Confederate stronghold up through the Battle of Memphis on June 6, 1862, at which time the Yankees moved in and it became a Yankee city. The "Memphis Daily Appeal", dedicated to the Southern cause rallying both civilians & soldiers, it was the most important newspaper of the region, soon famously known as the Moving Appeal.

On June 6, 1862, the presses and plates were loaded into a boxcar and moved to Grenada, Mississippi, where it stayed for a few months, until approaching Federal troops threatened again, forcing a move in November 1862 to Jackson, Mississippi, where it published until May 1863, when Federal troops again arrived. By this time, the Appeal had gained notoriety among Union forces as a rebel sympathizer while it remained on the run. The next stop was Meridian, Mississippi, from where, one issue and two days later, the wandering journalists moved on to Mobile, Alabama, then to Montgomery, and ultimately to Atlanta, the economic heart of the Confederacy. Its final move was to Columbus, Georgia, where Federal forces finally caught up with it.

It resumed publication following the war in Memphis on November 5, 1865. During just a four year period this newspaper published in nine different cities. (credit: Tennessee State Library & Archives) Complete as a single sheet newspaper. Minor wear at the margins, a very small worm hole at the very center affects 2 words on each page, and a small ink stain affecting 3 words in the Jeff Davis letter (see). A nice issue of a Memphis newspaper printed in Atlanta, Georgia. Please Note: All of our offerings are 100% authentic! We do not offer reprints or reproductions of any kind. They are guaranteed to be original!

For this specific item, A U. The per-item additional cost for folders, portfolios, and presentation cases vary. We will still provide tracking and insure them at our expense. Please check with your country's. We have been dealers in rare newspapers for over 43 years, serve as consultants to multiple museums, and are members of the American Antiquarian Society.

Timothy Hughes Rare Newspapers P. Desiring to conduct ourselves honorably in all things. Were it left to me to decide whether we should have a government without newspapers, or newspapers without a government, I should not hesitate a moment to prefer the latter. The item "VERY Rare CONFEDERATE Memphis Civil War 1863 Newspaper with Publisher on the Run" is in sale since Thursday, April 25, 2019. This item is in the category "Collectibles\Militaria\Civil War (1861-65)\Original Period Items\Other Civil War Original Items".